In-built intelligence on scheduling and error-checks 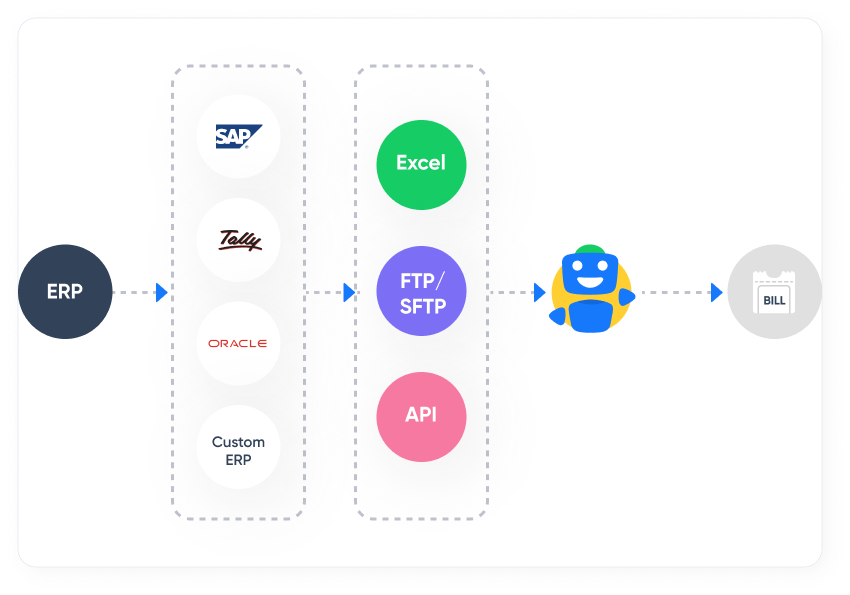 We are India’s leading full stack ASP-GSP player. With us, generating e-Way bills is simple, no matter what your scale is or what ERP platform you use.

Generate e-Way Bills at will with our scalable architecture

Smart scheduling of EWB and rich MIS and reporting

Multiple validations at each step, designed by 60+ tax experts

Connect with any ERP

Use our APIs, SFTP mode or templates to sync with your ERP

2-way integrations
with your ERPs

No matter what platform you use, we will help you connect with it. SAP, Oracle, Microsoft, Tally, Busy or any other ERP. 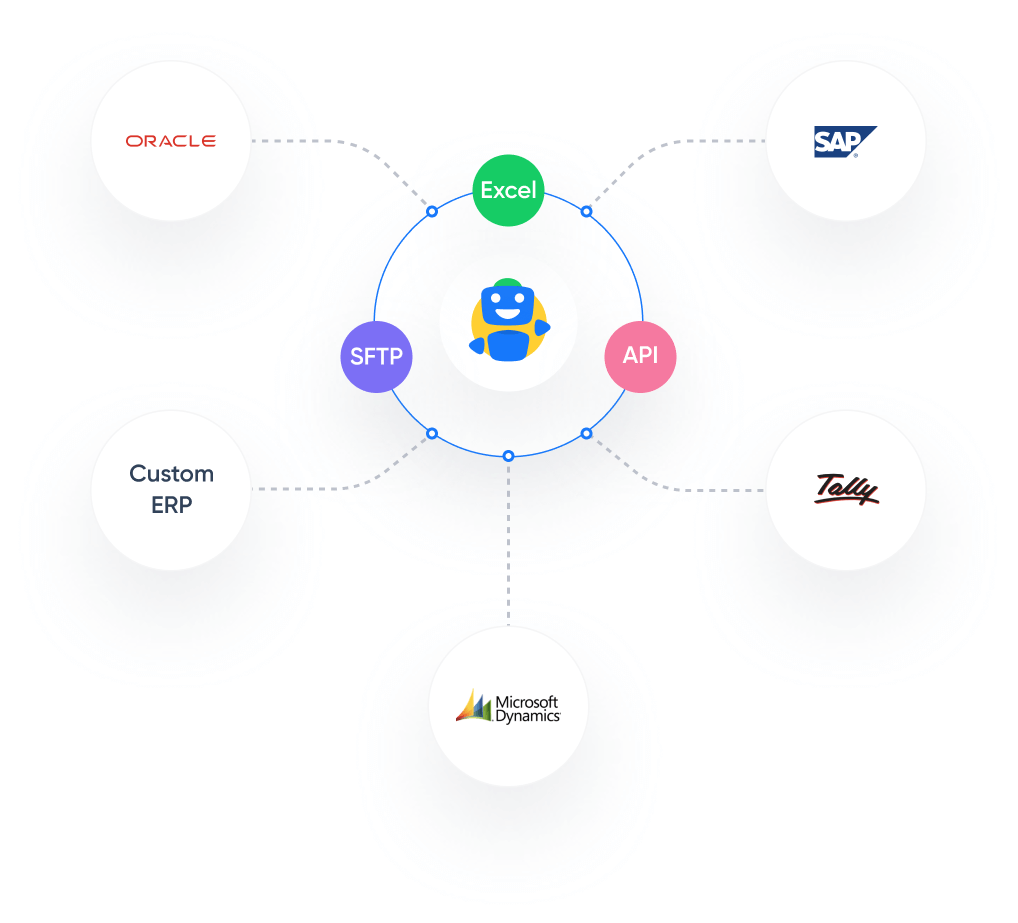 Choose an import method of your choice. We offer customer integrations over APIs and SFTP. You can even opt for connectors or templates with custom field mapping.

Import data with templates of your choice: Excel-based ClearTax custom formats or fill directly on the interface. 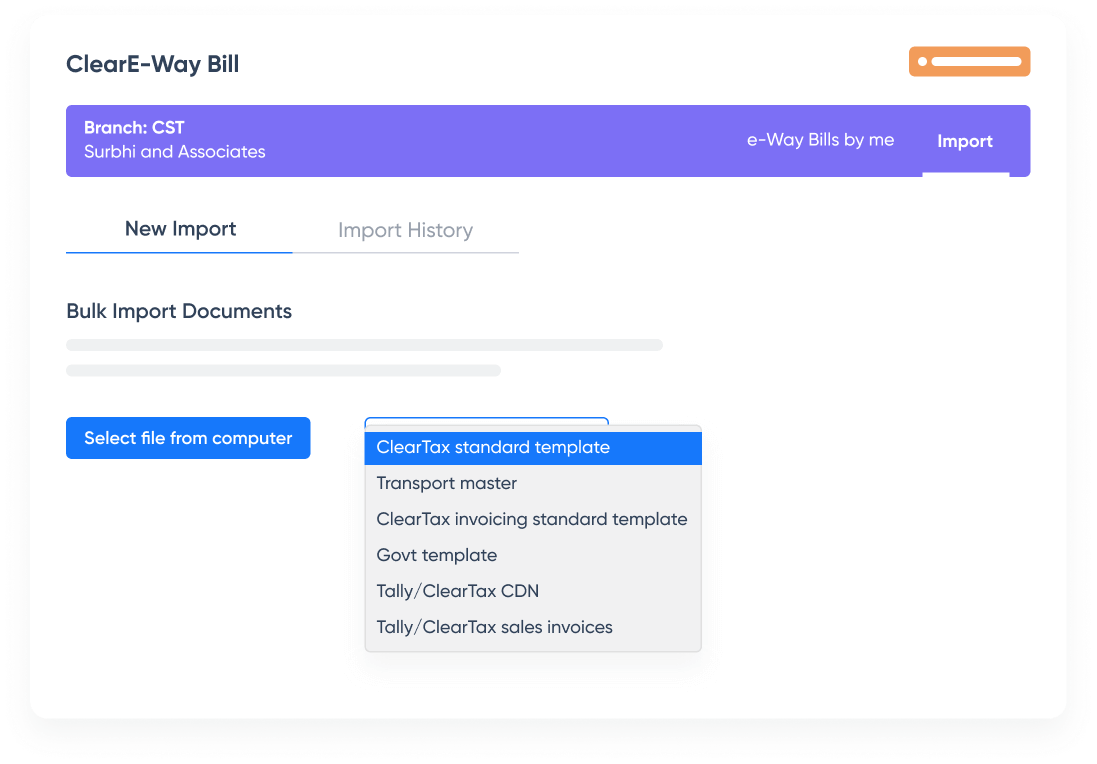 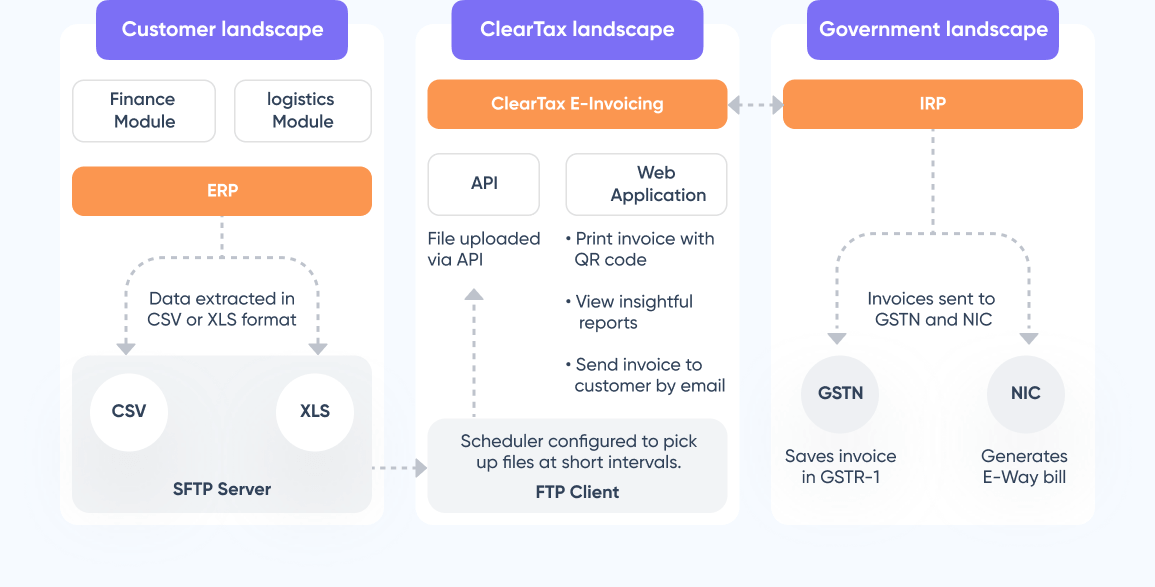 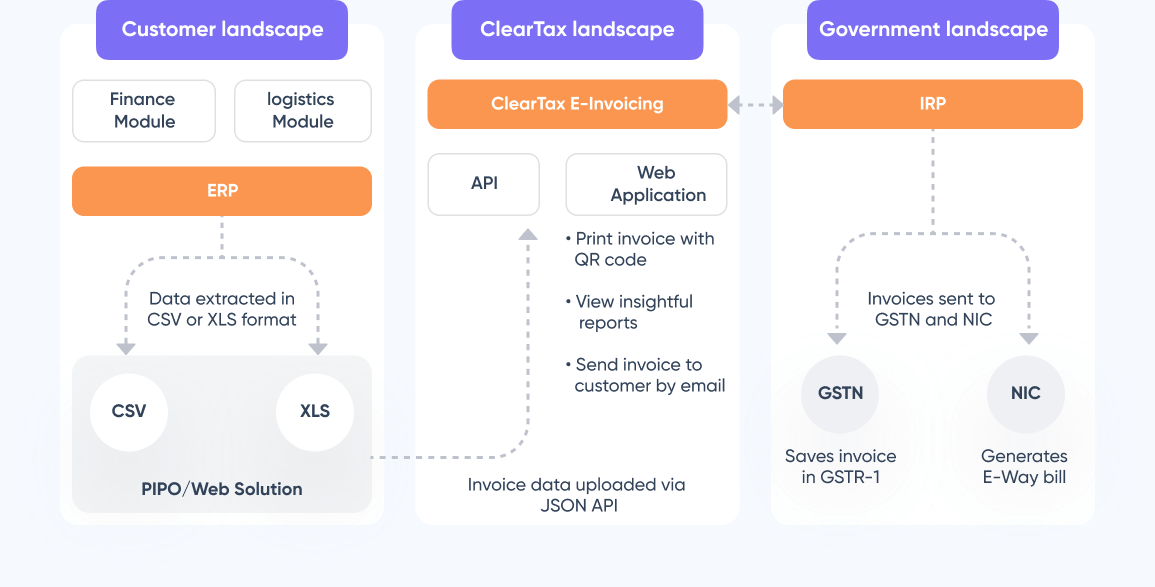 Validate your e-Way Bills with our system for HSN, rate of tax etc. so that your organisation works error-free. 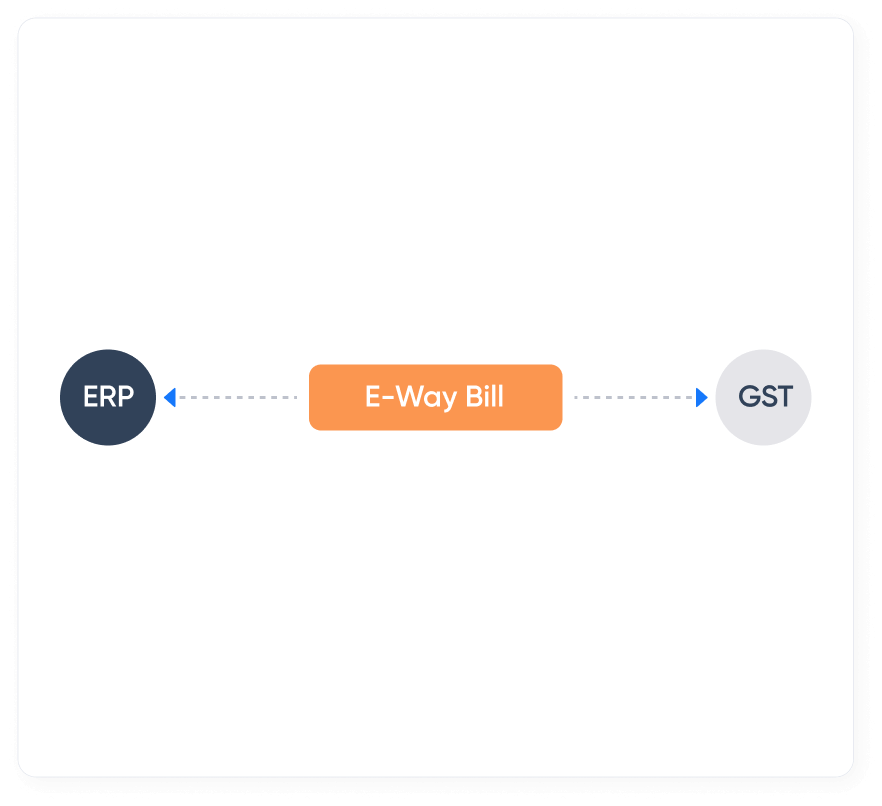 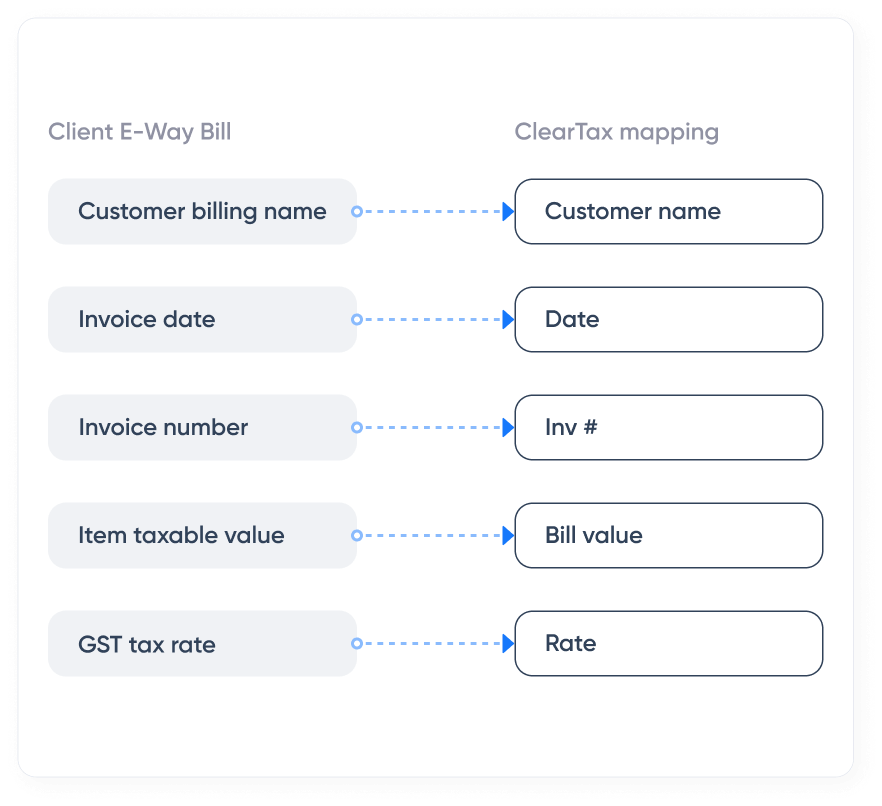 Generate e-Way Bills seamlessly with our system to stay ahead of the curve. Curb errors in the system with precision by eliminating manual entries 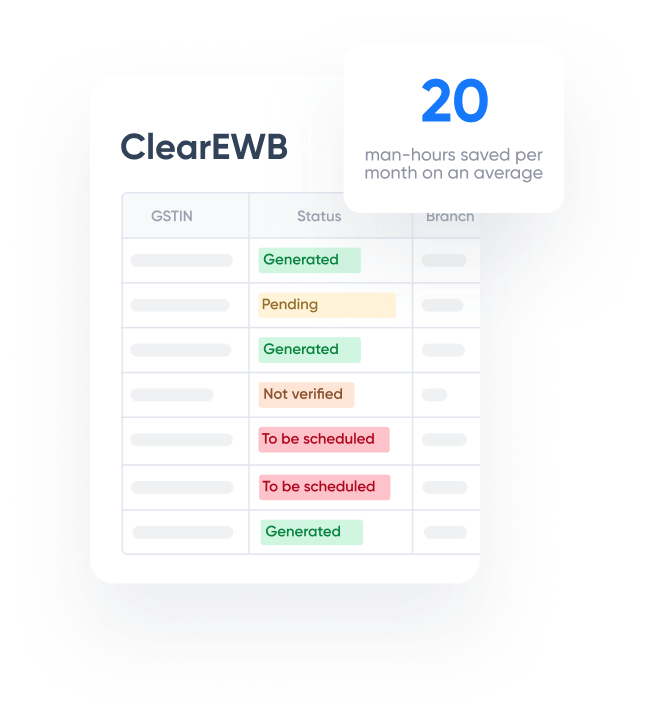 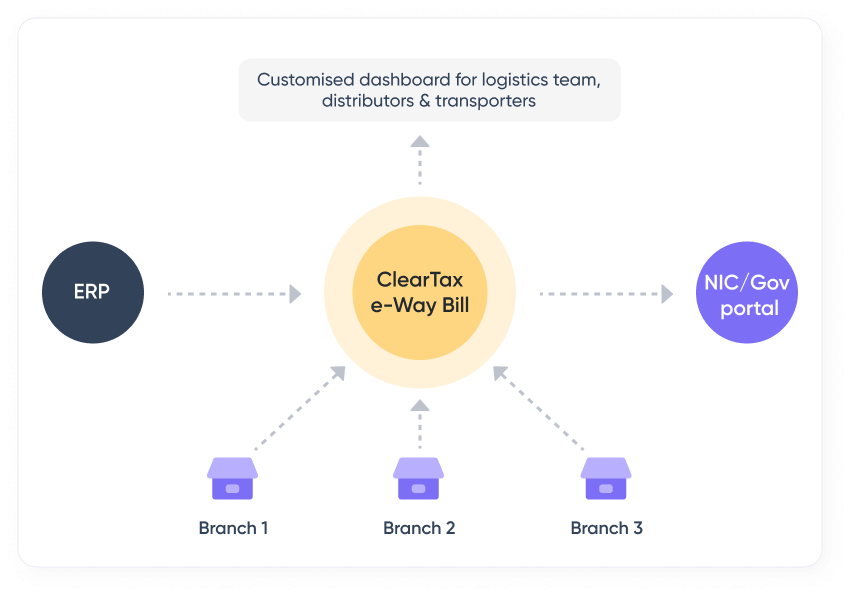 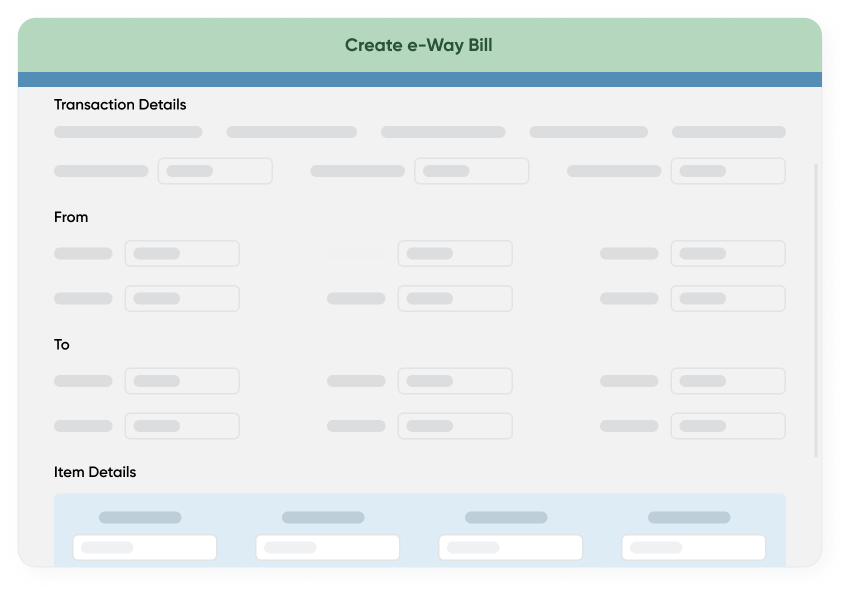 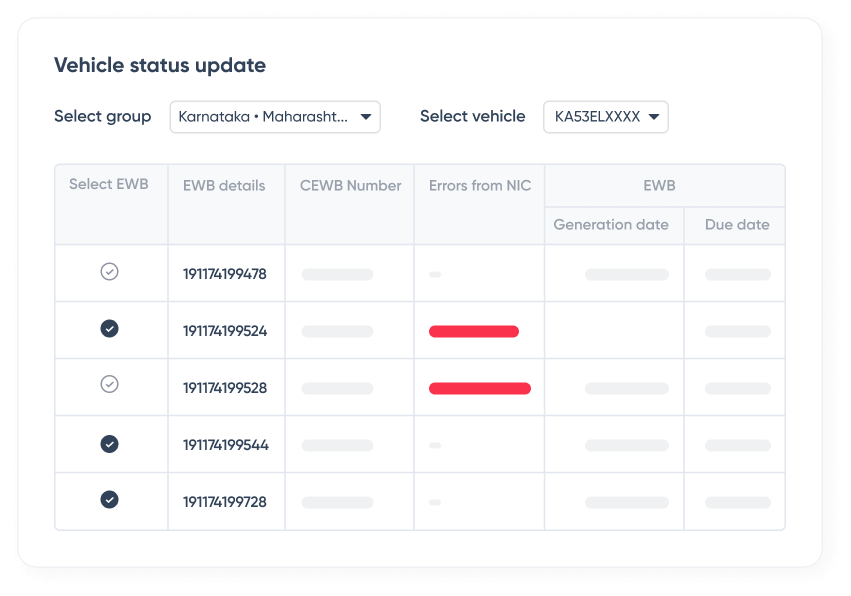 Select the e-Way Bills to consolidate and merge. No separate files and sheets needed. 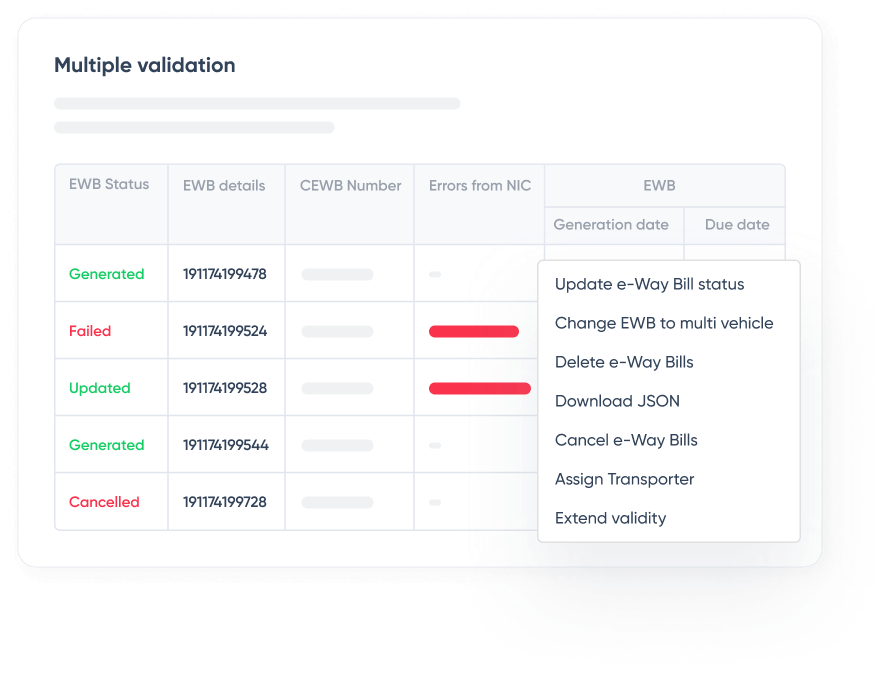 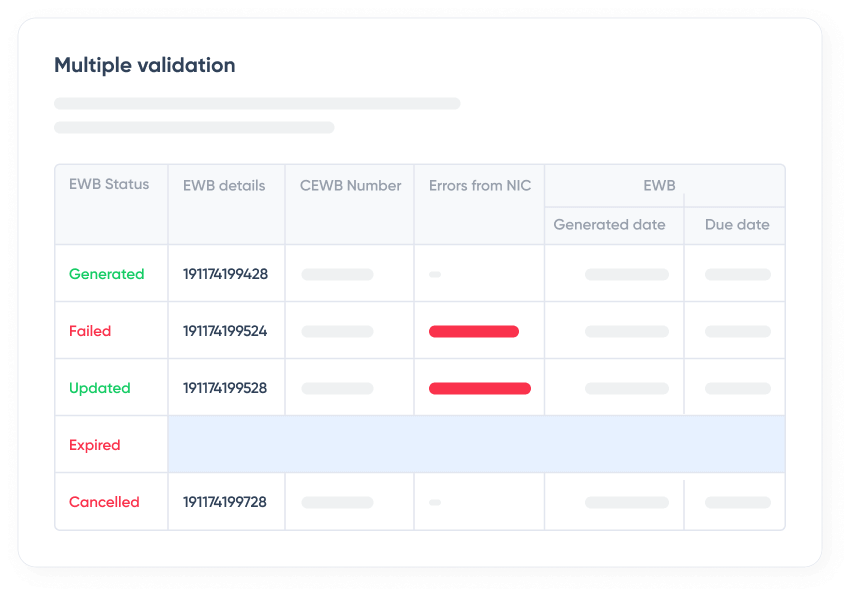 Smart error-proofing
at each stage 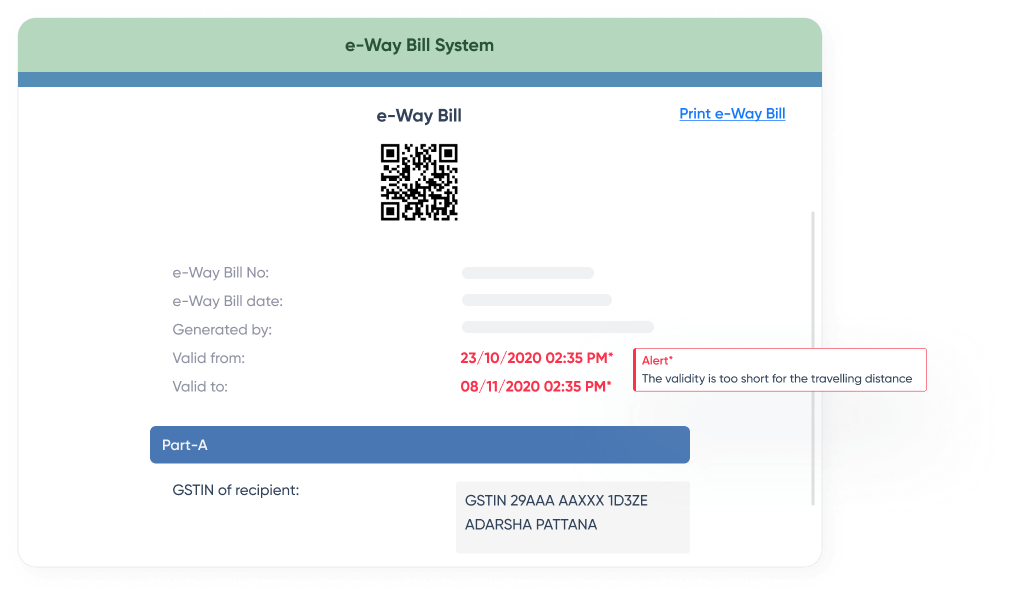 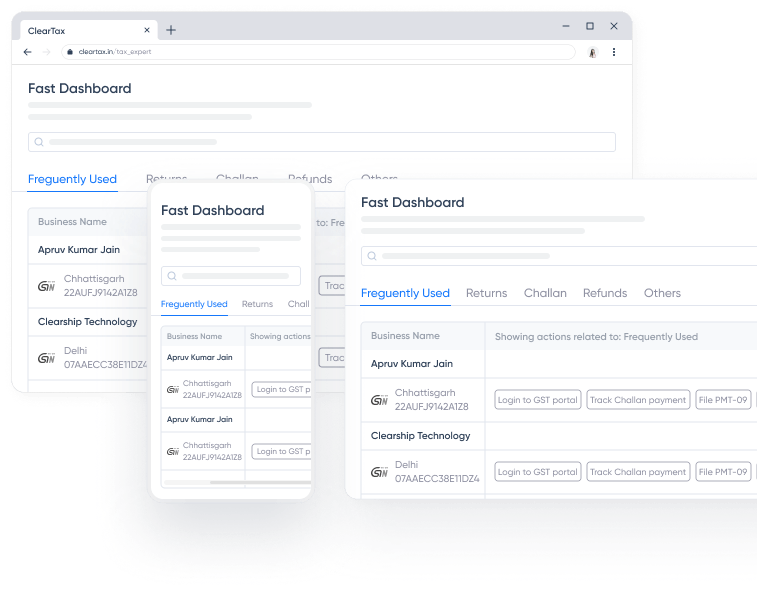 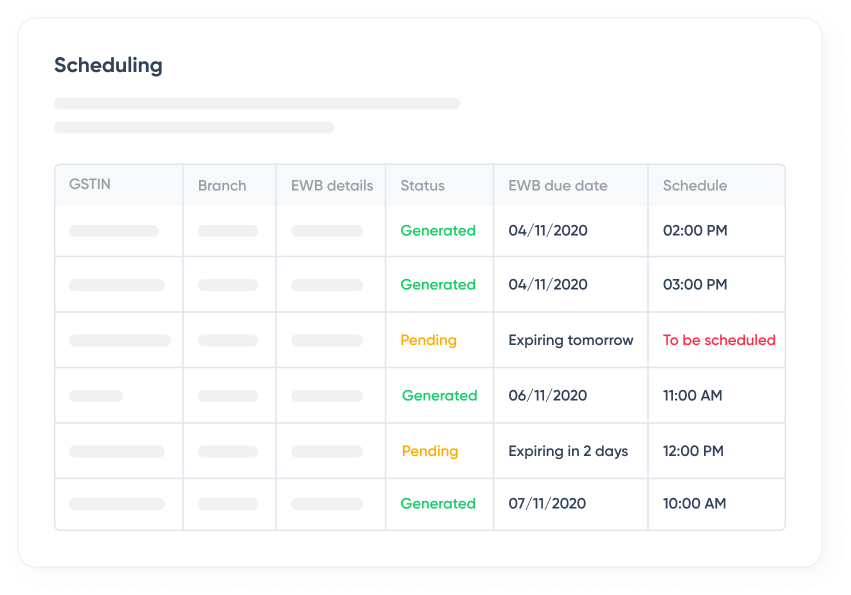 Alerts and notifications on validity expiry

Flexibility at its best: Generate e-Way Bills any time, even when you’re not at your desk 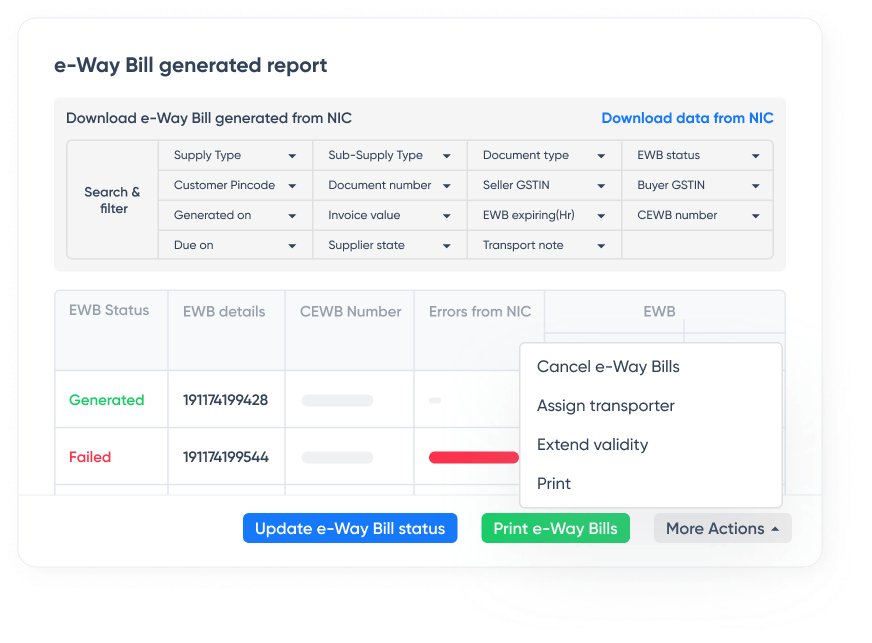 Never lose track of your data. Download them in bulk instantaneously

Browse through your invoices by either the EWB number, origin or destination

GSTINs validated in one go 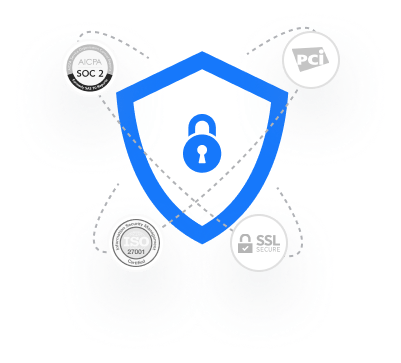 We are 128-bit SSI certified and PCI complaint which means your data reaches our servers safely.

We use ISO 27001 certified data centers, which are quarterly VAPT tested and externally audited.

We do not share your or your clients’ data with unaffiliated third parties for their own purposes. 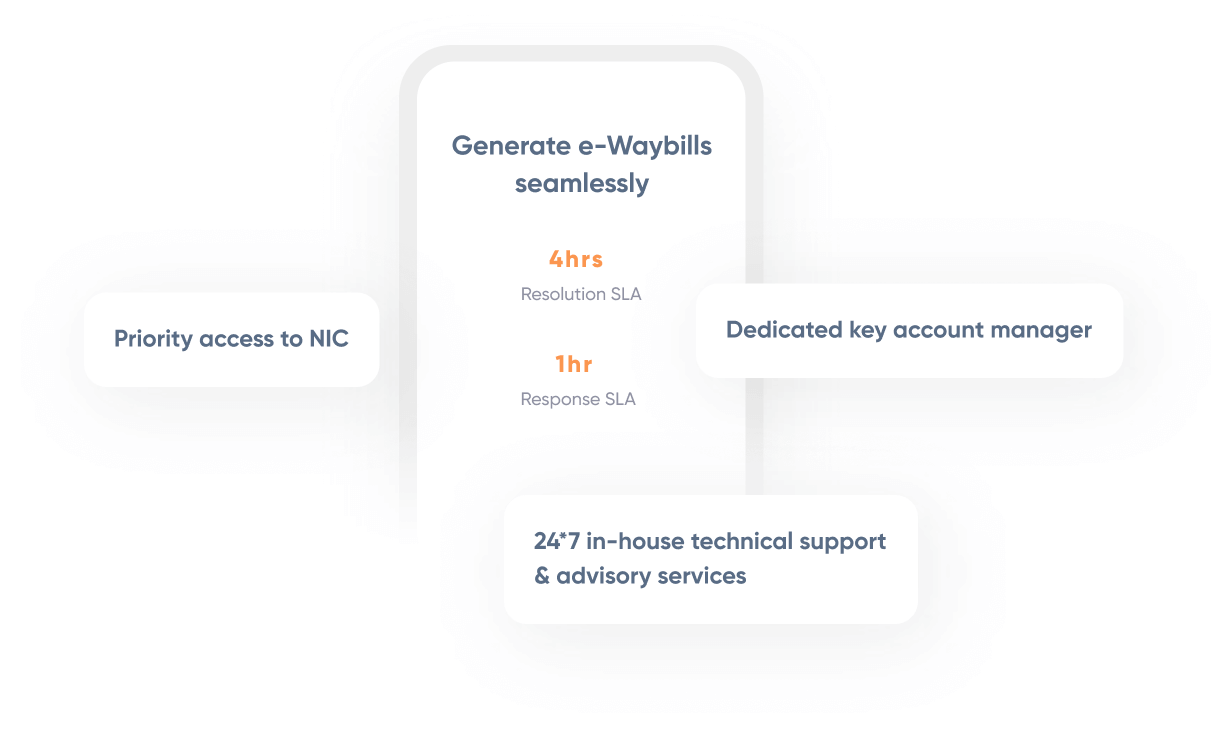 Hear it from our customers

They enabled us to implement e-Invoicing system in time and
handled all our business complexities with ease.
Thank you for the efforts and good job.

We went live without a glitch

Thanks to the team, we were live before 1st October without any hindrance. They handled all the complicated projects meticulously and seamlessly considering all the possible scenarios.

ClearTax has transformed the way we handle GST compliance. Real-time creation of e-Invoices and e-Way bills plays a significant role in providing us with critical insight into our business.

Please send us your contact details so that we can arrange a demo for a product of your choice.

Proofs of concept with your data

Please fill the details to contact our enterprise sales team 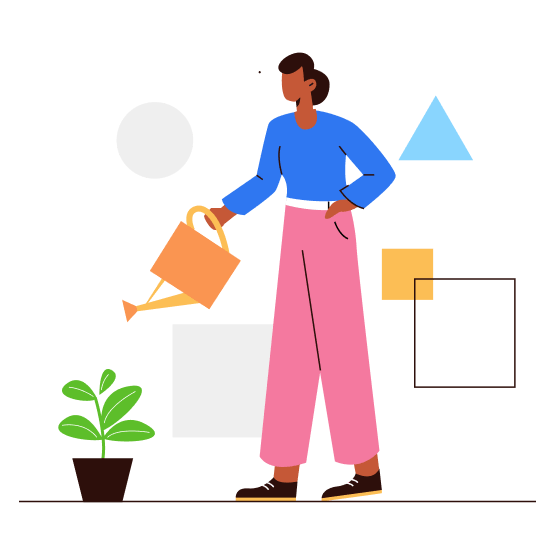 Explore other products
in the stack

Fast, dependable and affordable solution for your e-Invoicing needs.

Get up and running in 3 minutes

Improve your cash flow and costs with our AI-powered reconciliation engine.

What are the types of transactions that need the e-way bill?

E-way bill is mandatory for transportation of goods for all types of transactions such as outward and inward supply, whether within the state or across states. It includes unregistered persons or consignment for any other reasons other than supply.

For further understanding, please read our article on the applicability of e-way bill and exemptions.

With the introduction of the e-invoicing system, is the e-way bill still compulsory?

Yes. While transporting goods, wherever the e-way bill is required, it continues to be mandatory even after the e-invoicing system is implemented.

In case the e-invoicing system applies to me, whether the e-way bill gets auto-generated?

In case both part-A and part-B of the e-way bill are provided while generating the e-invoice as required by the schema, the details will be used to generate the e-way bill.

Suppose the part-B details are not provided at the time of reporting invoice to the Invoice Registration Portal (IRP). The same will have to be provided by the user through the ‘e-way bill’ tab in the IRP log in or e-way bill portal to generate e-way bills.

What is the Part-A Slip referred to in e-way bill generation process?

Can an e-way bill be deleted or cancelled?

Who can accept or reject the e-way bill and what is the time limit?

The person who initiates the transport of goods must generate the e-way bill specifying the details of the recipient of goods. There is a provision on the e-way bill portal for the opposite party to check the e-way bill details generated against his/her GSTIN.

Is there a validity period for an e-way bill?

Yes. The e-way bill expires and does not hold relevance on the expiry of the validity period. The e-way bill’s validity, including the consolidated e-way bill, depends on the distance that the goods have to be transported and the vehicle type.

Can the taxpayer extend the validity of the e-way bill?

Whether an e-way bill is required for the movement of goods from one unit of the company to another unit using its own vehicle located within 10 km?

Yes, an e-way bill has to be generated even where the movement of goods is within 10 km. The relaxation for updating vehicle details in part B is given only for movement of the goods from the consignor’s place of business to the transporter’s business for any further movement. Therefore, the e-way bill needs to be generated in all other cases, even if the distance covered is less than 10 km. However, if the motorised vehicle is not used for vehicle transportation, the E-way bill is not required.

How to generate an e-way bill for export & import transactions?

In case of the import or export, select the Sub-Type as ‘Import’ or ‘Export’ as the case may be and accordingly put the From/To Address of the supplier/customer as ‘Other Territory’. Ensure that the vehicle number is updated every time there is a vehicle change until the goods reach the port.

How to handle “Bill to” - “Ship to” invoice in the e-way bill system?

In the cases where the taxpayer raises the bill on somebody but has to send the consignment to a third party as per the business requirements, it is called “Bill to” - “Ship to” scenario. On the e-way bill system, the user must select the Bill to - Ship to option in Transaction Type dropdown while generating the e-way bill. The system will then enable the “Ship to” field for entering different state pincode for the consignment.

For the selection of Sub Type under Outward Supply, what do terms “CKD/SKD” & “Line sales” mean?

What is meant by the blocking of e-waybill generation facility?

Blocking the e-way bill generation facility means disabling a taxpayer from generating an e-way bill for non-filing two or more consecutive GSTR-3B returns on the GST portal. The GSTINs of such blocked taxpayers cannot be declared or used to generate the e-way bills either as a consignor or consignee.

How does unblocking take place on the e-way bill system?

The jurisdictional officer’s unblocking can be done online on the GST portal, upon considering the manual representation received from such taxpayers.

Sub-rule (7) of Rule 138 that covers this aspect, which is yet to be notified. Hence, until the notification to that effect is issued, the transporter need not generate an e-way bill for consignments having a value less than Rs.50,000, despite the total being more than Rs.50,000.

For more FAQs, please read our article on Compilation of Popular FAQs on e-Way bills.