The Ministry of Finance has released the transition plan for the proposed GST new return system. The same will be launched on a trial basis from July 2019 onwards, and will be implemented phase-wise from October 2019 onwards.

ITR Sahaj is ITR-1 and ITR Sugam is ITR-4, now GST will have Sahaj and Sugam forms. Regular taxpayers with a turnover of up to Rs 5 crores can now file GST returns on a quarterly basis against the earlier limit of Rs 1.5 crores, either in ‘SAHAJ’ or ‘SUGAM’. Small taxpayers making only B2C supplies can file Sahaj returns. Taxpayers making B2B supplies or making B2C and B2B supplies, but having turnover of Rs 5 crore or less, have been given an option to file ‘Sugam’ Returns on quarterly basis. The quarterly returns will be mostly be similar to the monthly returns, but require lesser information to be filled as compared to the regular returns. The taxes have to be self-assessed and paid on a monthly basis even for small taxpayers opting for the quarterly return scheme. The monthly returns are compulsory to be filed for taxpayers having turnover above Rs. 5 crores. Their return too has been simplified and now contain only two main tables – One to report outward supplies and another for availing ITC based on invoices uploaded by the supplier For availing ITC, invoices uploaded by the seller can be viewed and accepted or rejected by the buyer on a continuous basis. This largely auto-fills the return form based on the invoices uploaded by the buyer and seller. The new simplified process can be summarised as – ‘UPLOAD-LOCK-PAY’. Taxpayers can create their profiles based on the nature of supplies made and received by them. The return would show only those information fields that are relevant to the taxpayer’s profile. Also, taxpayers without any purchase or sale in a period can file NIL returns through an SMS. The new returns also provide taxpayers the facility to amend their invoices and other details filed in the return by filing an amended return. Taxpayers can also make payment through the amendment returns and save on their interest liability. All taxpayers other than small taxpayers have to compulsorily file monthly GST returns.

a. Not applicable to composition dealers, ISD, NR, persons liable to collect tax at source or deduct tax at source b. Return filing dates shall be staggered based on the turnover of the Taxpayer which shall be calculated based on the reported turnover in the last year i.e. 2017-18, annualized for the full year based on self-declaration of the estimated turnover. A questionnaire will be available on GST portal for a taxpayer to conclude his category

a. For NIL Filers –  Nil filers are those with no output tax liability and No Input tax credit both satisfied. But have to report by SMS, the NIL transaction statement/declaration the first and second month of that Quarter b. For taxpayers having the turnover of up to 5 crores in preferring Financial year-Tax payment is monthly

3. Continuous uploading and viewing of Invoices

a. Invoices uploaded by 10th of the next month auto-populated in the liability table of the main return of relevant tax month b. uploading of invoices by the supplier anytime-> Viewable by recipients


4. Invoice uploaded but return not filed

Will be treated as a self-admitted liability by the supplier and proceedings will be initiated against him after a reasonable show cause.

a. Wrong entries being made in the return, there would be a facility for filing this return b. Facility to file two amendment returns for each tax period c. Payment would be allowed to be made through the amendment return as it will help save interest liability

a. Monthly Returns filers: Liability declared in the return shall be discharged in full at the time of filing of the main return by the supplier as is being done at present in the present return FORM GSTR 3B. b. Quarterly Returns filers: In the first and second month of every quarter, they would use a payment declaration form. In this, self-assessed liability and input tax credit on self-declared basis shall be declared. But this will be full payment of the liability arising out of uploaded invoices only.

10. Declare the Purchase of Ineligible ITC in Annual Returns only

Filing the details of the Shipping bill in the return at a later date shall not be considered as the filing of an amendment return. 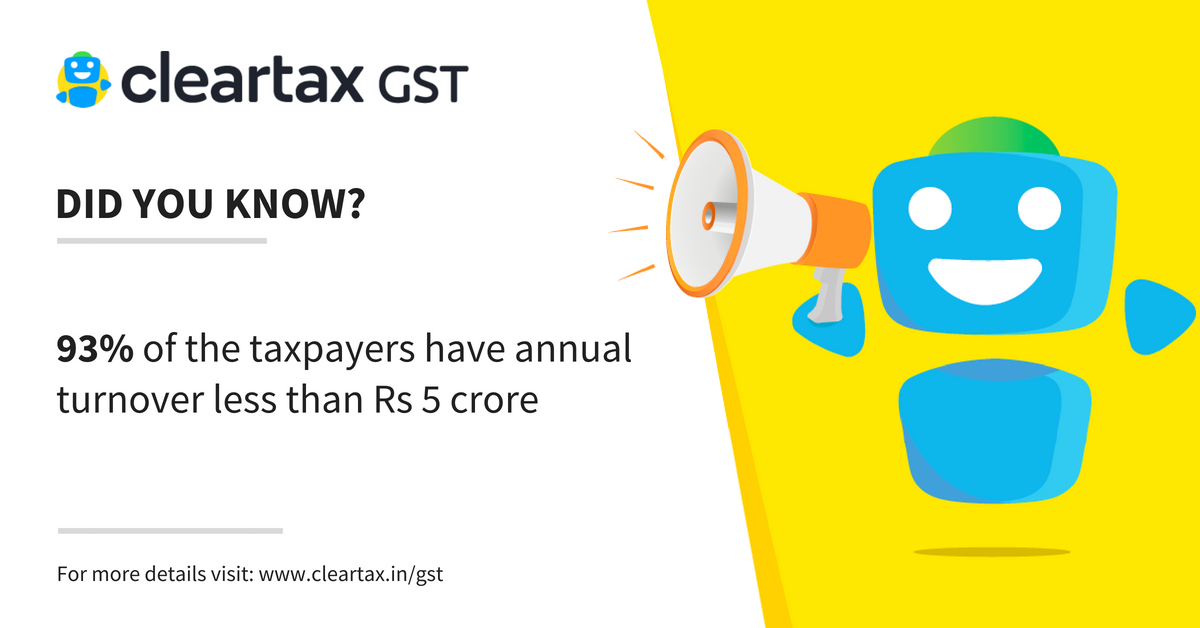 Earlier, all taxpayers having turnover between Rs 1.5 crores upto Rs 5 crores had to file monthly GST returns in GSTR-1 and GSTR-3B. Also, the GSTR forms had more tables and information to be filled. This move by the Council is aimed at increasing the ease of doing business for all taxpayers.