Under GST, transporters should carry an eWay Bill when moving goods from one place to another when certain conditions are satisfied. In this article, we cover the following topics-

Blocking of e-way bills due to non-filing of GSTR-3B resumes from 15th August 2021. 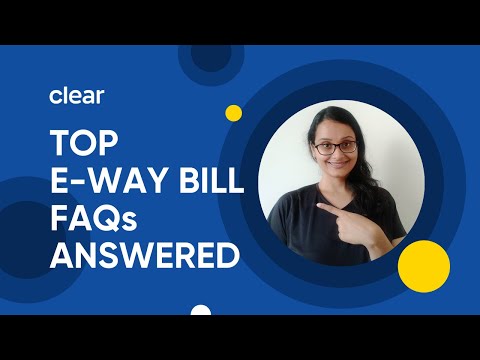 EWay Bill is an Electronic Way bill for movement of goods to be generated on the eWay Bill Portal. A GST registered person cannot transport goods in a vehicle whose value exceeds Rs. 50,000 (Single Invoice/bill/delivery challan) without an e-way bill that is generated on ewaybillgst.gov.in.
Alternatively, Eway bill can also be generated or cancelled through SMS, Android App and by site-to-site integration through API entering the correct GSTIN of parties. Validate the GSTIN with the help of the GST search tool before using it.
When an eway bill is generated, a unique Eway Bill Number (EBN) is allocated and is available to the supplier, recipient, and the transporter.

2.When Should eWay Bill be issued?

eWay bill will be generated when there is a movement of goods in a vehicle/ conveyance of value more than Rs. 50,000 (either each Invoice or in aggregate of all invoices in a vehicle/conveyance)  –

For this purpose, a supply may be either of the following:

Therefore, eWay Bills must be generated on the common portal for all these types of movements. For certain specified Goods, the eway bill needs to be generated mandatorily even if the value of the consignment of Goods is less than Rs. 50,000:

3. Who should Generate an eWay Bill?

The transporters need not generate the Eway bill (as Form EWB-01 or EWB-02) where all the consignments in the conveyance :

Unregistered Transporters will be issued Transporter ID on enrolling on the e-way bill portal after which Eway bills can be generated.

Note: If a transporter is transporting multiple consignments in a single conveyance, they can use the form GST EWB-02 to produce a consolidated e-way bill, by providing the e-way bill numbers of each consignment. If both the consignor and the consignee have not created an e-way bill, then the transporter can do so * by filling out PART A of FORM GST EWB-01 on the basis of the invoice/bill of supply/delivery challan given to them.

4. Cases when eWay bill is Not Required

In the following cases it is not necessary to generate e-Way Bil:

Note: Part B of e-Way Bill is not required to be filled where the distance between the consigner or consignee and the transporter is less than 50 Kms and transport is within the same state.

However, reliefs have been provided to people of few States by way of exempting them from eway bill generation in case of monetary limits falling below threshold amount or certain specified items. For Instance, Tamil Nadu has exempted people of its State from the generation of eway bill if the monetary limit of the items falls below Rs. One Lakh. To know more of such reliefs for other States/UTs, visit our page on state-wise e-way bill rules and threshold limits or alternatively check the respective commercial tax websites for each of such States/UTs.

6. How to generate eWay Bill on portal

E-Way Bill and the e-way bill number can be generated on the e-Way Bill Portal. All you need is a Portal login. For a detailed step-by-step guide on e-Way Bill Generation check out our article – Guide to generate e-Way Bill online.

An e-way bill is valid for periods as listed below, which is based on the distance travelled by the goods. Validity is calculated from the date and time of generation of e-way bill-

Validity of Eway bill can be extended also. The generator of such Eway bill has to either eight hours before expiry or within eight hours after its expiry can extend Eway bill validity.

No, you cannot generate a single e-way bill against two invoices.

However, you can use consolidated e-way bill to club two or more e-

No, e-way bill rules do not apply to service oriented transactions.

Hence, you need not generate an e-way bill against the supply of

The e-way bill is required at the time of delivery of goods only. So, if

invoice is raised but goods are not delivered yet, then part-A can be

upon delivery. The validity of e-way bill begins when Part-B is entered.