GST Law has provisions for special cases like transfer of business, where the transferee and transferor are both held liable to pay unpaid GST. Learn more.

These provisions come into force when there is an amount due under GST (tax, interest, penalty) which cannot be recovered from the taxpayer directly. This article will deal with the liability to pay GST in such cases.

Liability in case of Transfer of Business

If a taxable person transfers his business, either wholly or partly, to another, then the taxable person (transferor) and the person to whom the business is transferred (transferee) will be liable, jointly and severally, wholly or to the extent of such transfer, to pay the GST due.

They will be held liable to pay:

which was due from the taxable person (transferor) up to the time of such transfer. It is immaterial if such tax, interest, or penalty has been determined before or after the transfer, as long it is unpaid.

This transfer can be made through:

Apart from unpaid amounts, the transferee will be liable to pay GST from the date of transfer. If the transferee carries on the business in a new name (which is different from original) then he must apply for amendment of his registration certificate.

Liability of Agent and Principal

If an agent supplies or receives any taxable goods on behalf of his principal, then both the agent and the principal will be liable to pay GST, jointly and severally.

Liability of Directors of Private Company

This section overrides the Companies Act 2013.

If a private company does not pay its dues then the directors of the company will become jointly and severally liable for the dues. In this case, only the directors who were in office during the period when the tax was due will be held liable.

If a director can prove to the Commissioner that the non-payment was not due to any negligence or breach of duty due to his part, then he will not be held liable.

However, if the company has been converted from a private to a public limited company, then the above will not apply.

Note: This is only for unpaid dues of the company. Any personal penalty imposed on the directors under GST (for example, the penalty for helping in fraud) is not covered here. The director(s) will be responsible for all their personal dues.

Liability of Partners of a Partnership Firm

In a partnership firm, all the partners have unlimited liability. Similarly, under GST the partners of the firm are jointly and severally liable to pay any GST dues irrespective of any clause of Partnership Deed or any other law.

If any intimation regarding the retirement is not given within 1 month, the retiring partner will be continued to be held liable till such intimation is received by the Commissioner.

Now if neither C nor the firm informs the Commissioner regarding his retirement, and ABC & Co. does not pay the dues until it stands at 25,000 on 30th Sep 2018 (when they finally inform the Commissioner), then C would be liable for Rs. 25,000 even though Rs.15,000 was incurred after he had retired.

Note: The term ‘firms’ also includes Limited Liability Partnerships. Normally, partners have limited liabilities in LLPs. But the GST Act overrides all other laws and the partners become jointly and severally liable for the entire GST dues.

Liability in case of Amalgamation or Merger of Companies

If 2 or more companies merge/amalgamate:

then the 2 companies are individually responsible for their taxes.

The companies will be treated as separate companies under GST till the date of the order (and not order effect date). Their registrations will get cancelled on the date of order.

For example, A Co. & B Co. have received a court order on 20th August 2018 to merge with effect from 1st July 2018. Under GST they will be treated as separate companies till 20th August 2018 and each one will be responsible for its own dues until 20th August.

This becomes applicable when any business is conducted by a guardian/trustee/agent on behalf AND for the benefit of a minor/incapacitated person. The business owes tax, interest and/or penalty under GST.

In such cases, both the guardian/trustee/agent AND the beneficiary (minor/ incapacitated person) will be liable under GST Act. The due amount can be recovered from both parties.

Liability of Court of Wards etc.

This is applicable to the estate of a taxable person, which owns a business, is under the control of the Court of Wards, the Administrator General, the Official Trustee or any receiver or manager appointed by a court.

If the business owes any amount under GST then the Court of Wards, the Administrator General, the Official Trustee or any receiver or manager will be held liable along with the taxable person. 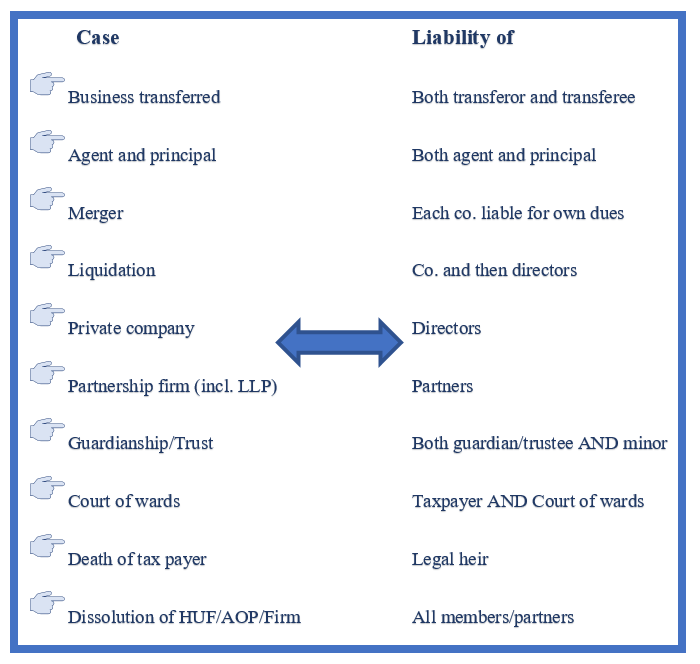 Thus we find that these provisions ensure that the amount due for GST is recovered from the taxpayer, directly or indirectly. Please refer to the next part of the article which deals with liability to pay GST in cases of death and dissolution.