37th GST Council meeting was held on the 20th of September in Goa. Smt. Nirmala Sitharaman, the Union Finance Minister, chaired this Council meeting. Take a look at the highlights of the meeting.


Composition dealers have been granted exemption from filing of annual returns in GSTR-9A for the fiscal years 2017-18 and 2018-19. In the future, it is mostly expected to be done away since the form GSTR-4 has been tweaked to allow an annual declaration of turnover and tax details.
Those taxpayers having an annual turnover of up to Rs 2 crore in FY 2017-18 or FY 2018-19, may choose to not file GSTR-9, from the date to be notified by CBIC. GST Council has also decided to review the simplification of GSTR-9, 9A and 9C forms and filing. However, they must continue to file annual returns for FY 2019-2020 onwards.
Large taxpayers should continue to comply and close annual return filing both in GSTR-9 and GSTR-9C by 30 November 2019.
The new GST return system will now be implemented from April 2020. This decision is appreciated as several transitional issues that could crop up while implementing in the middle of the year, can now be avoided. Taxpayers can begin on a fresh note from a new financial year. It must be noted that the decision to defer applies to all taxpayers and for all forms under the new GST returns system.
To push the timely filing of a statement of outward supplies by taxpayers, the GST Council recommended restrictions on Input Tax Credit (ITC) claim. ITC will be restricted for the recipients if the suppliers have not furnished the details of outward supplies.
CBIC released Central Tax Circular number 105, dated 28 June 2019. Through the circular, they have clarified post-sale discount for promotional activities by the dealer, secondary discounts, and reversal of ITC on post-sale discount.
The circular clarifies that whether the post-sale discount has to be included in the value of supply or not and whether ITC is to be reversed at the time of issuing a credit note or not in certain specified cases.
The GST Council recommended revoking of the circular number 105 with retrospective is effective from the beginning (ab-initio).

Services provided by an intermediary to a supplier of goods or recipient of goods when both the supplier and recipient are located outside the taxable territory. 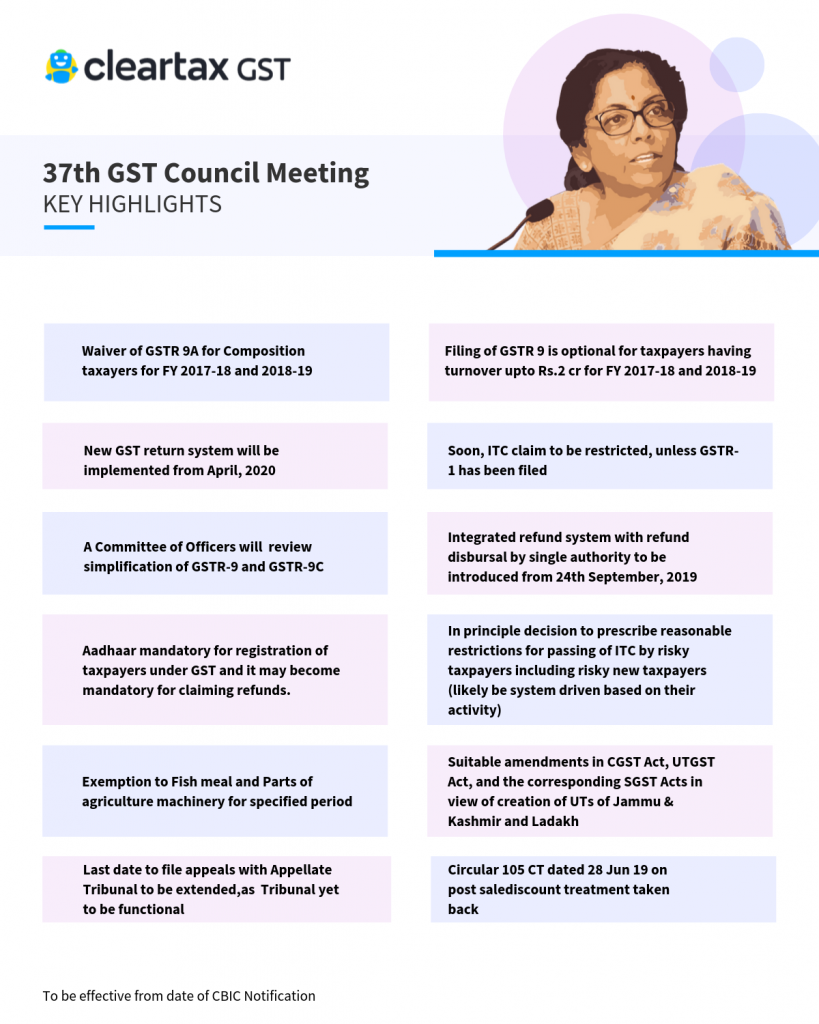 Expectations from the GST Council meet

The original due date of GSTR-9/9A/9C was on the 31st of December 2018. This has been extended four times and the latest due date is 30th November 2019. Only 15% of taxpayers had filed their annual return when the third extension of due date took place. This figure shows the challenges involved in filing the annual return.

Taxpayers and professionals are facing hardship while reporting HSN summary of purchases, Input Tax Credit (ITC) bifurcation between goods and services, ITC breakup for expenses and while reconciling with Books of Accounts to mention a few.

The compliance level of GSTR-3B was found to be almost double when compared with GSTR-1. This proves that people are looking for a simplified return like GSTR-3B, which is a summary return.

Businesses are hoping that the government focuses more on the simplification of GSTR-9 rather than providing for an extension of the due date. The government may in the upcoming Council meeting consider removing certain disclosure requirements less significant. Alternatively, it may replace an existing return with a summarised return, which can be easily understood by a taxpayer. It is also expected that the Council may take a decision on providing an exemption to small taxpayers for the annual return compliance requirement for FY 2017-18.

2. Implementation of New Return Filing System Can Be Deferred

The new return filing system requires reporting of additional information when compared to the present system. The taxpayers need sufficient time to adopt a proper book-keeping and invoice management system which fulfils their disclosure requirements under the new system. The Council may take a decision on deferment of the new return system for smooth implementation.

The GST network also recommended for the launch of the simplified new GST returns system from January 2020. The GST Council may also look into the proposal of two deadlines for small and large taxpayers under new simplified GST returns.

3. Council to Focus on the GST Rate Cuts Concerning the Auto Sector

The auto industry is demanding for a GST rate cut to 18% from the current GST rate of 28%. The Finance Minister has assured that the government is aware of the troubles in the auto sector. FM also added that the concerns related to the automobile industry will be taken up in the upcoming Council meeting.

In the previous GST Council meeting, the GST rates on electric vehicles were reduced from 12% to 5%. A conclusive decision around GST rate cuts with regards to the auto industry is expected to happen in the next Council meeting.

4. Council may Look at the ITC Treatment in the Healthcare Sector

Several hospitals have claimed that their yearly profit margins have gone down by around 8% since there is no Input Tax Credit (ITC) benefit. Currently, except for cosmetic surgeries, implants, and hair transplant, all other health care services are exempt from GST charges.

Since ITC cannot be claimed on them, the cost of inward supplies is increasing. Hence, the healthcare service providers are now urging for an output GST of 5% on such taxable services without ITC. It is most likely that the Council will take this discussion further in the upcoming GST Council meeting.

5. Council is Likely to Review the Present Revenue Position

However, the collections made until now have not been sufficient enough to meet the yearly targets. According to the Union Budget 2019-20, the government brought down the GST revenue collection targets to Rs 6.63 lakh crore versus the previous target of Rs 7.61 lakh crore that were mentioned in the Interim Budget 2019-20.

Take a look at the highlights of the previous GST Council meeting here.