It is mandatory to pass on the benefit due to reduction in rate of tax or from input tax credit to the consumer as an anti-profiteering measure. Read More

The GST Council announced the anti-profiteering rules on 18th June 2016.

Anti-profiteering rules are needed as lessons learnt from other countries show that there has been inflation and prices have increased after GST implementation. For example, Singapore saw a hike in inflation when it introduced GST in 1994. It makes it more important for Indian administrators to keep tabs on prices after the implementation of GST. India is doing what many countries did: initiate anti-profiteering measures at the retail level to protect consumers from price swindling

Clause 171 has been inserted in the GST Act which provides that it is mandatory to pass on the benefit due to the reduction in the rate of tax or from input tax credit to the consumer by way of commensurate reduction in prices.

The crux of the anti-profiteering rules is-

Section 171(1) casts responsibility to pass on the benefit of GST to the recipient for following two aspects:

For example, eating out has become cheaper under GST (mostly 18% GST as compared to earlier 20.5%). This benefit must be passed on to the consumers.

Passing of benefit due to reduction of tax rate, in case of supplies exclusive of tax or for immediate services is not a big challenge. This is because the reduction in tax rate will directly be evidenced by invoices, and the recipient will get benefit of the rate reduction. Such can be seen now in the cases of eating out and travelling through app-based taxis (reduced by 1%).

However, in case where contract of supplies is inclusive of taxes, this provision will cast responsibility on the supplier to reduce the price due to reduction in rate of taxes.

For example, FMCG items are normally sold on MRP basis or some other fixed prices by retailers. If there is any reduction in rate of tax it has to be passed on to the ultimate recipient. Accordingly, there will be a need to revise MRP or other prices fixed for such supplies.

However, if GST has a negative impact on the cost, then prices can be increased. For example: If the output supply was zero-rated in previous regime and also remains zero-rated in GST regime, the business will not get any input tax credit.

If the tax rates are increased, tax under reverse charge imposed etc. then prices will increase.

For example, domestic LPG was exempt from tax under earlier regime. Now they fall under 5% GST. This will result in an increase in the prices of cooking gas.

Almost all industries will be affected with respect to passing of benefit due to better credit chain. In most places, be it service sector, manufacturing, trading, or any specific industry, all are going to get advantage of better flow of input tax credit except sectors having zero-rated output supply. So overall the expectations of anti-profiteering provisions are commensurate reduction in prices of supplies.

For example, radio taxis earlier could not adjust the input VAT on office supplies with the output service tax payable. Now, ITC on all inputs can be adjusted against output tax. These benefits are passed on by them in the form of offers and discounts. Similarly, many big stores have GST sales and special offers to pass on the benefit.

The Authority shall consist of-

The Authority will determine the method and procedure for determining whether the reduction in rate or the benefit of input tax credit has been passed on by the seller to the buyer by reducing the prices.

Duties of the Authority–

Orders Passed by the Authority

The Authority will order-

(3) The Technical Member shall be paid a monthly salary of Rs. 2,05,400 (fixed) and along with allowances of a group ‘A’ officer. A retired person will have his salary reduced by the pension amount.

he enters upon his office, or until he becomes 65 years old. He will be eligible for reappointment. A person cannot be a Chairman if he is 62 years or above.

Secretary to the Authority

The Additional Director General of Safeguards under the Board shall be the Secretary to the Authority. 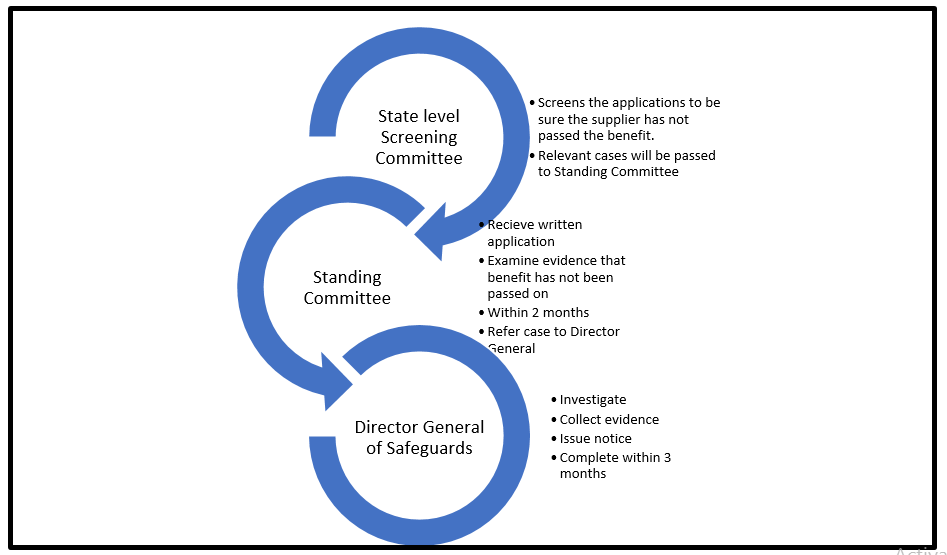 The parties will provide information on a confidential basis. They may be required to furnish non-confidential summary thereof. If in the opinion of the party providing such information, the information cannot be summarized, then such party will submit to the Director-General of Safeguards a statement of reasons why summarization is not possible.

Cooperation with other agencies or statutory authorities

The Director-General of Safeguards may seek the opinion of any other agency or statutory authorities if required.

Power to summon persons to give evidence and produce documents

The Director-General of Safeguards or an officer authorised by him will have the power to summon any person necessary either to give evidence or to produce a document or any other thing. He will also have same powers as that of a civil court and every such inquiry will be deemed to be a judicial proceeding.

The reason for such a provision is quite clear – wherever GST has been implemented, there has been an initial rise in prices and this has lasted anywhere from six months to just short of two years.

The government has already warned the businesses that there will be raids.

But is it an easy task?

To accomplish the same the entire manufacturing chain will have to be mapped and examined and vendors below a certain threshold may not have the kind of paperwork the authority may need to look at.

But what will the authority look into? If the tax on, say, simple printers has come down, whether the price has been reduced by that much? But the cost of a component might have increased. It will mean a look into the cost of all the components going into the production of printers and whether each of the many components has seen an increase or decrease in tax incidence and what the manufacturers of those components have done?

Malaysia also brought in Anti-Profiteering measures before GST which followed the net profit margin methodology – a normal profit margin was ascertained for each product on a base date and any profit charged beyond this margin was considered unreasonably high.

Australia followed a net dollar margin rule – if GST led to taxes and costs falling by $1, prices needed to fall that much. Conversely, if cost increased by that much, prices could too.

India does not have a clear method of assessing the GST benefits for purposes of passing it on would be appropriate, acceptable and compliant.

While the reason behind such anti-profiteering measures is to protect the masses, the government should also ensure honest taxpayers are not harassed by these provisions.