Get various licenses easy and quick.

How to Remove Company Name from the MCA Database

On certain condition, a company name could be removed from the MCA database or even struck-off by the Companies Registrar. Let us take a quick glance at the procedure for striking or removal of company name from MCA database.

Removal by the registrar

The Companies Registrar can strike-off or remove a company name if he or she has a reasonable cause to think of:

As far as the notice is concerned, the Registrar would request the organization and its directors for sending their representations together with the copies of relevant documents. While obtaining the notice, the organization by a special consent or resolution of 75% of shareholders based on paid-up share capital could file a reason for the purpose of removing the company name from MCA database. Once the application is received, the Registrar would cause a notice to be issued.

The notice issued for removal would be officially published in the Gazette for the knowledge of general public. During the expiry of time given in the notice, the Company Registrar will remove the organization name from MCA database followed by publishing a notice in the Official Gazette. Once the notice gets published in the Gazette officially, the company will stand dissolved. Even though the company will be dissolved as above mentioned, the tribunal would still have power for winding up an organization whose name was removed from the companies register.

An application for striking-off the company’s name would not be made in the preceding three months if the company has:

If the organization files an application for the removal of its name in violation, then it would be punishable by the fine amount of around Rs. 1 lakh rupees.

(a) the company has failed in commencing its business within the first year of its incorporation; or

(b) the company isn’t carrying on any operation or business for a period of 2 immediately preceding FY (financial years) and has applied within that period for acquiring the dormant company status under section 455,

The registrar shall send a notice to the company and all the directors of the company, of his intention to remove the name of the company from the register of companies and requesting them to send their representations along with copies of the relevant documents, if any, within a period of thirty days from the date of the notice.”

The Registrar may remove the company’s name from the companies register in terms of the Act of Section 248:

Provided that the following categories of the organization should not be striking-off from the company’s register under the rule 4, namely:

Application for the removal of Company’s name

Section 248 should be made in the Form STK-2 together with the fee of INR 5000. Every application under the sub-rule should accompany a no-objection certificate from the appropriate Regulatory Authority related to the following companies, namely:

The manner of Filing application 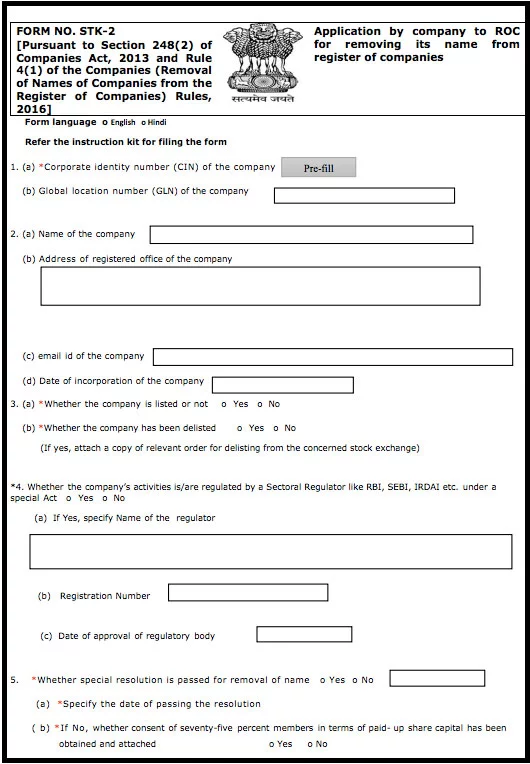 2. If the concerned director won’t have a digital signature certificate, then the physical copy of that form, which is duly filled, shall be manually signed by the director. It may be attached to the Form STK 2 whilst uploading the form.

The Form STK 2 will be verified by the chartered account or company secretary or even cost accountant in the whole-time practice.

Get an Expert
Get an expert
at affordable price