How to claim ITC under the New GST return filing system ?

Input tax credit is the tax paid on the purchase of goods or services which can be set off against the tax liability on the sale of goods or services. Under the system of GSTR-1 and GSTR-3B, the tax credit is claimed by the recipient based on the sales invoices uploaded by the seller/supplier. The provisional credit (without invoice upload) is allowed only to the extent of 10% of ITC in GSTR-2A. It is different from the mechanism laid under the pre-GST regime, where credit was allowed based on the purchase invoices on buyer’s record.

However, with the new GST return system, the whole system of ITC claims will be monitored via e-invoicing, ANX-1 and ANX-2. Earlier, the issue was that seller raised tax invoices on which the purchaser availed credit without knowing that the seller has not paid taxes to the Government. It resulted in government losing money and hence, it was necessary to introduce a mechanism where credits are available to the purchaser only when the seller pays tax to the Government.

In this article, we will discuss in detail the procedure of claiming input tax credit comparing both the present and New GST return filing system.

The CBIC has notified that taxpayers can claim input tax credit in the GSTR-3B return from February 2020 to August 2020, without applying the rule of capping provisional ITC claims at 10% of the eligible ITC as per GSTR-2A.

The CBIC has revised the extent of provisional input tax credit claims from 20% to 10%.

The Ministry of Finance has released the transition plan for the proposed GST new return system. The same will be launched on a trial basis from July 2019 onwards, and will be implemented phase-wise from October 2019 onwards.

Currently, credits under GST are required to be claimed by following this procedure:

1. A seller uploads the invoice-wise sales details every month/quarter by 11th of the subsequent month. It depends upon the GSTR-1 filing frequency of the taxpayer on the GST portal.

2. Invoices uploaded by the seller in GSTR-1 can be viewed by the purchaser in his GSTR-2A form.

3. The purchaser can claim input tax credit in the GSTR-3B form based on the tax invoices provided by the seller, as found in his GSTR-2A. The claims can be upto 110% of the eligible ITC in GSTR-2A for a tax period. Hence, a taxpayer can claim 10% more ITC towards the invoices/debit notes not uploaded in GSTR-2A by corresponding suppliers. It must be reconciled and adjusted in the subsequent tax periods when the invoices are actually uploaded by the suppliers.

Please note: Ultimately, if the provisional input tax credit claimed on purchases in GSTR-3B is more than the input reflecting in GSTR 2A, then department might issue a notice seeking an explanation for the same. The credit can be denied by the department for the invoices for which tax is not paid by the seller.

The new GST returns functions based on a single return RET-1 or RET-2 or RET-3, supported by two annexures -ANX-1 and ANX-2. Out of these forms, ANX-2 holds importance due to the fact that taxpayer can in this annexure, either accept, reject or mark invoices as pending, for ITC claims.
The following table gives a picture of new GST return structure: 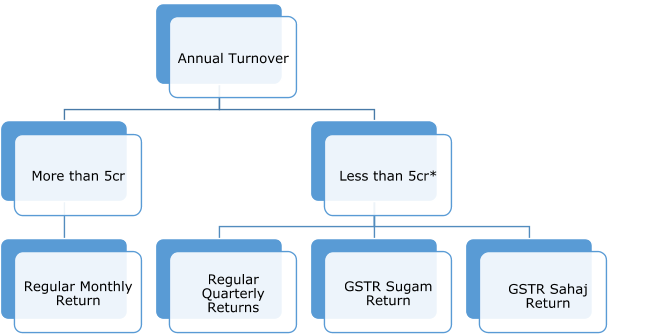 *Assessee with a turnover of less than 5 crores will have an option to file quarterly returns and one of the returns mentioned above.

a. The supplier will have a facility of continuously uploading invoices anytime during the month which will be visible to the recipient at any point of time.

b. Invoices uploaded by the corresponding suppliers will be auto-populated in an annexure for inward supplies of the recipient on a real-time basis, and the recipient will be able to view  these invoices in the “viewing facility” enabled on the portal;

c. The recipient will be able to take specific actions against the invoices available in the “viewing facility” after 10th of the next month :

i. Accept – If he wants to avail the credit

ii. Reject – If he does not want to avail the credit or the transaction does not belong to him

iii. Pending – If he wants to take the credit in the subsequent period

There shall not be an automatic reversal of input tax credit at the recipient’s end where the invoice is uploaded but tax has not been paid by the supplier. In case of supplier failed to pay tax on the supply, recovery shall be first made from the supplier and in some exceptional circumstances like missing taxpayer, closure of business by the supplier or supplier not having adequate assets or in cases of input claimed by the recipient in an illegal way, etc.

Invoices not uploaded by the supplier

In the initial phase of six months, the recipient will have an option to avail ITC on self-declaration basis even on the invoices not uploaded by the supplier by 10th of the next month by using the facility of availing ITC on missing invoices.

A new section 43A was introduced in 2018 via amendment to CGST Act, where a mechanism for availing of the input tax credit by the recipient even if the supplier does not provide adequate details in his returns was introduced. Under this section, the rule 36(4) was notified where the recipient can avail ITC even if the supplier does not upload invoices to the extent of 10% (earlier 20%) of ITC available to the recipient in GSTR-2A. It applies from 9th October 2019. However, the upper limit stipulated under Section 43A for availing ITC on a provisional basis is 20% which needs amendment. With the new GST returns system, the provisions will be amended/relaxed to suit the process laid down by the new GST returns.