1. Deferment of the new GST return system and e-invoicing

2. Changes in the GST rates

Now, the interest for delayed GST payment will be calculated on the net tax liability. This amendment will apply retrospectively from 1st July 2017.

The GSTR-9 & 9C deadline is extended to 30 June 2020 for FY 2018-19. Also, the turnover limit will be increased from Rs 2 crore to Rs 5 crore for mandatory annual return filing. Hence, filing GSTR-9C is optional for the taxpayers having the turnover less than Rs 5 crore.

A new scheme called ‘Know your Supplier’ has been introduced so that the taxpayers are informed about the basic details of the suppliers with whom they transact or propose to conduct business.

6. Waiver and extension of due dates

The due date of Form GSTR-3B for July 2019 to January 2020 is extended till 24th March 2020 for taxpayers with a principal place of business in the Union Territory of Ladakh. Also, a similar extension is recommended for Form GSTR-1 and Form GSTR-7.

7. Amendment to revocation of cancellation

Taxpayers who have cancelled their GST registration till 14th March 2020 can file an application for revocation of cancellation of registration. The window to fill this application is available till 30th June 2020. The extension is a one-time measurement to facilitate those who want to continue conducting the business.

Important change on GSTR-1: The GST Council decided to stagger the GSTR-1 filing for taxpayers with: The GSTR-2A can be generated on 14th of following month

5.50 p.m The GST Council defers the proposal on the taxability of economic surplus of brand owners of alcohol for human consumption

5.40 p.m The GST Council will continue with GSTR-1, GSTR-2A and GSTR-3B till September 2020 and defer the new GST return system till such time

4.45 p.m: The GST Council may remove the blocking of the Input Tax Credit (ITC) for the taxpayers who opt for lower rate of 5% as output GST

4.20 p.m: The GST rate on mobile phones will be increased from 12% to 18% allowing a full claim of input tax credit; Relief given to domestic service providers of maintenance, repair and operations. More details awaited 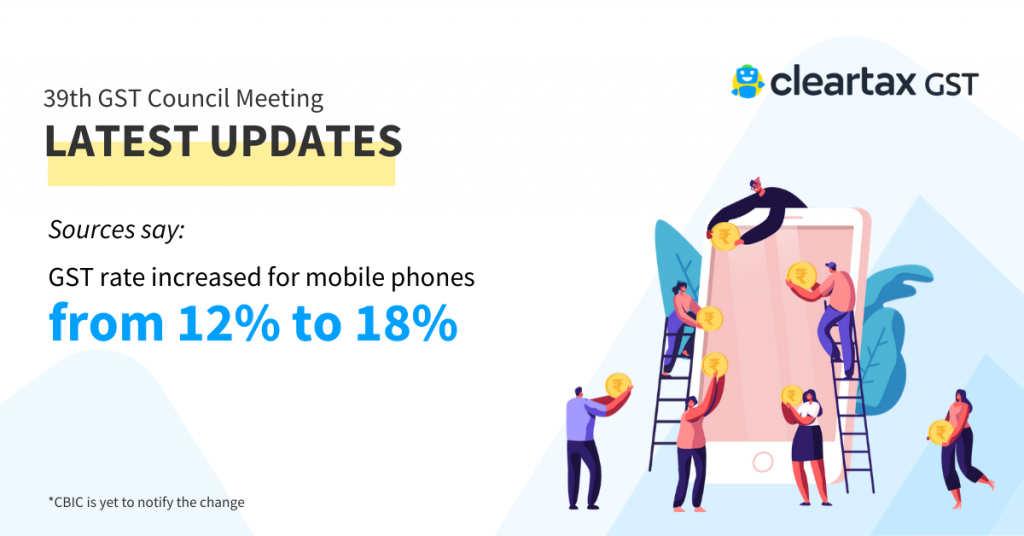 4.00 p.m: GST rate rationalisation postponed to the next meeting to be held in April 2020, details of which are awaited

3.45 p.m: GST Council to announce the e-way bill-FASTag integration to be applicable from April 2020

1.30 p.m: Union FM likely to defer the issue of the states’ compensation to the next meeting in April 2020; Reassures states for the payment of full compensation cess dues

12.30 p.m: Infosys asks for a year’s time to build smooth functioning GST’s IT systems by January 2021; Infosys Chairman Nandan Nilekani to be part of next three GST Council meetings

12.15 p.m: Shri Sushil Kumar Modi made a presentation on the current IT challenges faced by the taxpayers

11.20 a.m: Meeting is underway, as Union FM Nirmala Sitharaman chairs the meeting in the presence of State FMs:

The preparation of e-invoicing seems sub-par, and the GST Council may consider extending the date of implementing the e-invoicing system by three months. It is said that it may be made applicable from 1st July 2020 as against the earlier date of 1st April 2020. With more time at its hands, GSTN may be able to provide improved solutions as well.

2) Rolling out the new GST return system in April 2020

As per the latest development on 7th March 2020, taxpayers are facing many technical difficulties on the GST portal. These have led the GSTN to give Infosys a fortnight to fix them. Given that the government wants to fix the present GST return system sooner, it seems to be looking to stabilise the present system ending in March 2020. Moreover, the annual GST returns filing facility will be on focus till 31st March 2020. On the other hand, the CBIC and tax officers are increasingly concerned about the number of tax evasions and are looking into the means for its prevention. All these have led to the speculations that the new GST return system might be pushed further by a month or two.

The applicability of interest charge is now on the net liability, as opposed to gross liability, but applies prospectively. Many tax professionals and small taxpayers are dissatisfied with the move, requesting the government to make this a retrospective change since July 2017.

There have been multiple instances where the GST notices have been sent out for wrongful tax credit claims and non-payment of interest on delayed GST payment. In some cases, the extended due dates in the previous periods have not been considered while sending out the notices. Considering that the first two years of GST was mostly not stable for taxpayers, giving them relaxations will help them bear less damage. Hence, any penalty or late fees reduction will help them prepare for better compliance in future periods.

It was speculated in the previous GST Council meeting that the five slab structure would be brought down to three slabs by carrying out a major rate rejig. The 5% tax rate will be hiked up to a maximum of 9-10%, and the 12% tax rate will be removed. The GST Council has set up a revenue augmentation committee to look into the possible solutions for increasing the GST collections. In addition to these, certain items that were exempted or nil rated may make a comeback under the tax net. The GST Council has begun correcting the cases of inverted tax structure prevalent for certain items and sectors. In the 38th GST Council meeting, GST on woven and non-woven bags was increased from 12% to 18%. More items such as mobiles, textiles, solar modules, railway locomotives, fertilisers, steel utensils (whose output tax rate ranges between 5-12%) are expected to undergo the rate corrections. However, no major rate changes can be expected in the current scenario.

States will be pushing the centre to resolve the compensation matter, who are most likely to demand full compensation for the fiscal year. Hence, long deliberations are expected in the room. The GST Council will also be discussing the measures to strengthen and build a strong GST system against tax evasions. The previous GST Council meeting was concluded on 18th December 2019 where an important decision was made to defer GSTR-9 and 9C for the first two years of GST. All eyes are on this GST Council meeting as addressing the taxpayers’ woes tops the agenda.