Agriculture is said to be the primary occupation in India. It is usually the only source of income for the large rural population in India. The country as a whole is entirely dependent on agriculture for its basic food requirements. The government has a numerous amount of schemes, policies and other measures to promote growth in this sector – one of them being an exemption to income tax.

It may seem like the fact of exemption to income tax is all that we need to know when it comes to the taxation of agricultural income but there is more to it. Let us take a look at the provisions of the law in this regard.

The Income-tax Act has its own definition of agricultural income which constitutes the following 3 main activities:

Rent is the consideration for the right to use the land. The scope of the possible sources of income that can be derived from land is many. An example would be fees received for renewal of grant of land on lease. However, revenue from land does not include consideration received on sale of land.

a. Agriculture: The meaning of agriculture though not covered in the Act has been laid down by the Supreme Court in the case CIT v. Raja Benoy Kumar Sahas Roy where agriculture has been explained to consist of two types of operations –

The basic operations would include cultivation of the land and consequently tilling of the land, sowing of seeds, planting and all such operations that require the human skill and effort directly on the land itself.

The subsequent operations would include operations that are carried out for growth and preservation of the produce like weeding, digging soil around the crops grown etc and also those operations which would make the produce fit for use in the market like tending, pruning, cutting, harvesting, etc. Income derived from saplings or seedlings grown in a nursery would also be considered to be agricultural income whether or not the basic operations were carried out on land.

b. Through performance of a process by the cultivator or the receiver of rent in kind that results in the agricultural produce being fit to be taken to the market:

Such processes involve manual or mechanical operations that are ordinarily employed to make the agricultural produce fit for the market and the original character of such produce is retained.

c. Through sale of such agricultural produce: Where the produce does not undergo ordinary processes employed to become marketable, the income arising on sale would generally be partly agricultural (exempt) income and part of it will be non-agricultural (taxable) income.

The Income Tax has prescribed rules to make this bifurcation regarding agricultural and non agricultural produce for products like tea, coffee, rubber, etc.

The conditions for classifying income derived from farm building as agricultural income are as follows:

a. The building should be on or in immediate vicinity of the agricultural land and is one which the receiver of rent or revenue or the cultivator, by reason of his connection with the land, requires the building as a house to stay or as a storehouse, or uses it for these kind of situations

b. Either of the two conditions should be satisfied:

The land is assessed by either land revenue or a local rate assessed and collected by government officers; OR

If the above condition is not satisfied, the land should not be located within the following region:

Note: Even where the local population is < 10,000, the land should also not be situated within the jurisdiction of the local municipality or cantonment board.

In cases where the activities have only some distant relation to land like dairy farming, breeding, rearing of livestock, poultry farming, etc. they do not form a part of agriculture income.

In simple terms, the non-agricultural income should be greater than the maximum amount not chargeable to tax (as per the slab rates). 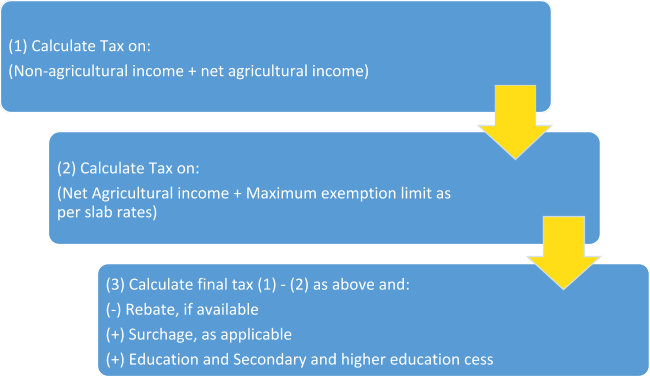