The term ‘interim’ means temporary or for the time being. 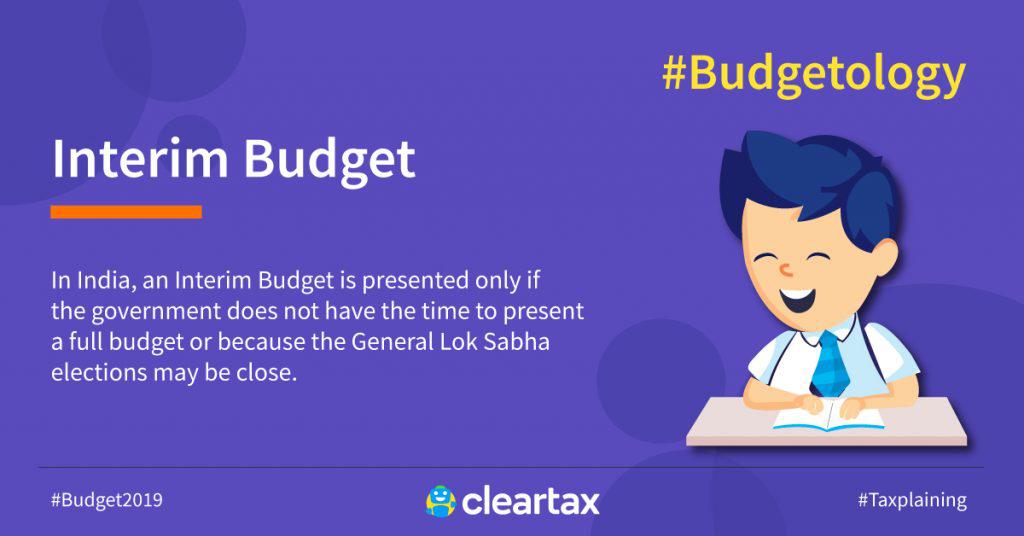 What is the meaning of Interim budget?

The Interim Budget contains detailed documentation of every expense to be incurred and every rupee to earned through taxes in the coming few months until the new government comes to power. During the transition period, the ruling government needs the Parliament’s approval to extract money from the Consolidated Fund of India, where the government puts all its revenue.

When the election is around the corner, it is unrealistic for the ruling government to launch a regular Annual Budget. So it gets passed as an Interim Budget, consisting of full estimates of the revenue and expenditure and also some policy measures too.

‘Interim Budget’ and ‘Vote on Account’ are two different terms in Budgetary context. The latter has only the estimate of expenses required during the period before the General elections. The current i.e. the outgoing government will present it in the Parliament on 1 February, like Congress presented the previous Interim Budget in 2014.

When is interim budget applicable?

Interim Budget is usually presented by the ruling government before the General Lok Sabha Elections held every 5 years. Just like every Union Budget, this provisional Budget too will be like a progress report card on the expenses and income earned in the past year.

As for the future, it can only propose possible expenditures in the months leading to the Election (which should not be more than 6 months). The ruling government does not usually announce any major tax reforms that could financially burden the next government. They have to be very careful of the spending and revenue collection in the coming months of their term. Any significant policy changes or tax reforms may or may not prove beneficial for the government in upcoming elections.

How is Interim Budget different from the Final Budget?

However, the second part will contain documentation of only basic expenses until the election. According to the Electoral Commission Regulations, the current government is not allowed to introduce any major policy changes, new rules or amendments that can influence the vote banks unfairly.

Does Interim Budget 2019 hold any value?

The 2019 Interim Budget by the NDA Govt will be crucial as it can impact the voters deeply. Though it is not the complete budget, it will entail the source of money as well as touch on how it will be utilized. According to inside sources, the finance ministry is planning to introduce additional income tax benefits to salaried class and increase the deduction limit on home loan interest to attract the mid-income range people.

The introduction of new NPS rules – increase in the government contribution and tax benefit – last month is also an indicator of that. It should be remembered that the sole reason for an Interim Budget to be there in place to make sure that government operations do not seize up. Financial year ends on 31 March and the Government of India cannot access the Consolidated Fund of India without Parliament’s authorization. So, an Interim Budget is the only choice until the new government is formed.