Under the income tax provisions,  “salary” comprises of 3 components:

3. Profits in lieu of salary.

Of the above, the term perquisite, owing to its complicated valuation is one of the most talked about topics related to salary head.

Perquisites, familiarly known as perks, is nothing but casual emolument or benefit which an employee enjoys on account of his/her job or position. Perks are in addition to remuneration received by individual periodically for services rendered. Perks can be either of the following:

The income tax laws have provided for rules on valuation of various kind of perquisites. Further, as Form 16 is only the consolidated statement of salary/benefit given to employee by employer, income tax provision has provided for a requirement of issue of separate statement providing details of various perquisites given to an employee. This statement needs to be furnished in Form No 12BA. In this article, we have discussed Form 12BA in detail:

Form 12BA is a detailed statement showing particulars of perquisites, other fringe benefits, and profits in lieu of salary.

Form 12BA is required to be issued only when the salary paid or payable to the employee exceeds Rs 150,000. In case of salary not exceeding Rs 150,000, details of perquisites which already forms part of ‘Part B’ of Form 16 itself would suffice and no requirement of separate statement in the form of ‘Form 12BA’. Hence, Form 12BA is only an additional document to be provided specifically for perquisites. ‘Salary’ for this purpose:

Includes: pay, allowances, bonus or commission or any monetary payment from one or more employers

Excludes: Dearness allowance which does not enter computation of superannuation or retirement benefits of concerned employee, employer’s contribution to provident fund, exempt allowances, value of perquisites, payments which are specifically excluded from being considered as perquisites, lump-sum payments received at the time of termination of service or superannuation or voluntary retirement such as gratuity, severance pay, leave encashment, voluntary retrenchment benefits, commutation of pension and similar payments

To be issued even in absence of perquisites

Meaning of ‘Salary’ to be considered for the purpose of applicability makes it implicit that Form 12BA shall be issued even in the absence of any perquisite given to employee. Employer may mention that no perquisites have been received by the employee in Form 12BA.

Employers issue Form 12BA along with Form 16 which is a tax deducted at source certificate and hence, follows due date applicable for issuance of Form 16 i.e., 15th June of immediately following financial year

5. Difference between Form 12B and Form 12BA

As both Form 12B and Form 12BA are dealt with by same Rule No., Rule 26, people often get confused between the two.

While Form 12BA as discussed above, is a detailed statement of perquisites to be issued by employer to employee, Form 12B is a statement to be provided by employee who is joining new employer in the middle of financial year to his employer with respect to details of income earned from previous employment and tax deducted at source on such income if any.

Details of employer such as Name, address, Tax deduction Account Number, assessing officer (TDS) jurisdiction, Details of employee such as Name, designation, Permanent Account Number, Income from salary other than perquisites, Financial year to which details pertain to, Perquisite valuation in detail with respect to each kind of perquisites, perquisite value chargeable to tax, total tax deducted need to be provided. In addition, the total of profit in lieu of salary also needs to be provided. 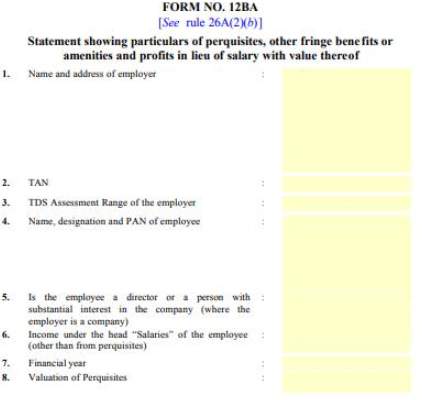 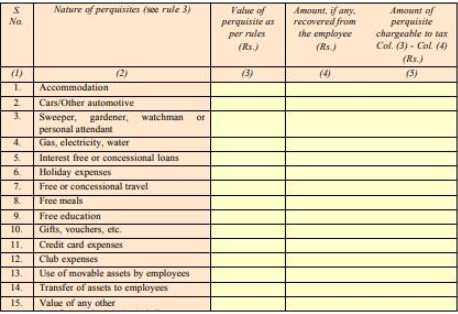 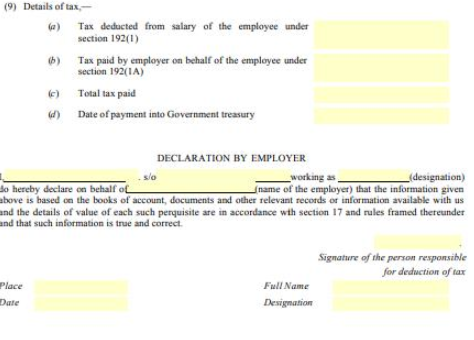