Budget 2021 update: Few of the items on which Customs Duty Rates are revised are as follows:
– Reduced duty on copper scrap from 5% to 2.5%
– Basic and Special additional excise duty on petrol and high-speed diesel oil (both branded and unbranded) is reduced
– Increased duty on solar inverters from 5% to 20%
– Raised duty on solar lanterns from 5% to 15%
– The basic customs duty on gold and silver reduced.
– The department will rationalise duty on textile, chemicals and other products
– The revised rates will be applicable from 2nd February 2021 onwards.

The Union Budget 2020 was presented on 1 February 2020 by the Union Finance Minister Smt. Nirmala Sitharaman.While all eyes are on the popular sops expected under the income tax slabs and reliefs, one must also stay updated about our main source of revenue to the government which is Customs duty and Goods and Services Tax (GST).

The changes notified in GST were procedural and focused to end the fake invoicing menace. These GST legislative changes in Finance Bill, 2020 (later to be called as Finance Act, 2020) were earlier recommended by the GST Council. On the other hand, customs law and foreign trade measures were announced to boost the domestic industries and encourage export sector.

The amendments will be passed through the Finance Act, 2020 after receiving the President’s assent.

Updates on Customs and Foreign Trade in Union Budget 2020

Here are the highlights from the foreign trade front along with the rate revisions: 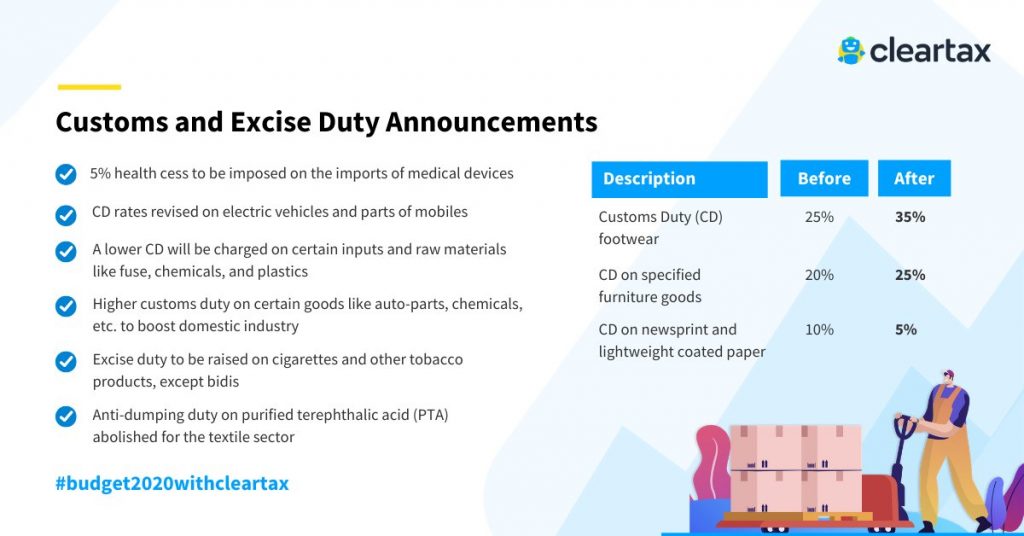 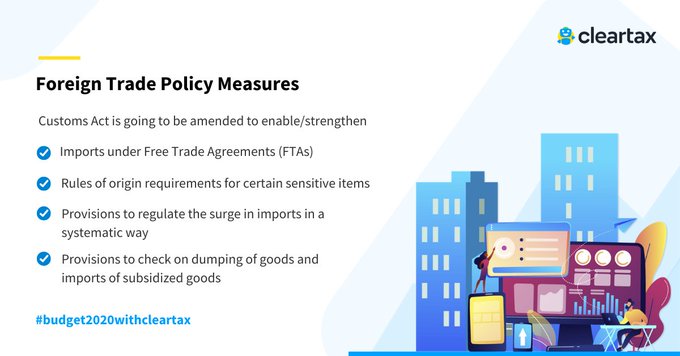 Below was the list of top expectations on the GST-front from the Union Budget 2020:

New GST returns to come into effect after legislative changes

The filing of GST returns has undergone prime changes in the past two and a half years. It will see yet another significant change with the new system, effective from 1 April 2020. Hence, the government may recommend and pass the necessary changes to the GST law and its corresponding rules on the GST returns. It needs the approval of both the houses of the Parliament and accordingly, will be placed during the Union Budget 2020. The new returns in forms RET-1, RET-2 or RET-3 along with the annexures in ANX-1 and ANX-2 will be introduced replacing the regular returns in GSTR-1 and GSTR-3B.

The GST Council has simplified the GST annual returns a few times and made it non-mandatory for the small taxpayers to file. In spite of the benefits showered, the compliance did not pick up, even with a week left for the extended filing deadline for FY 2017-18.

The data till 24 January 2020 suggests that close to 44% and 19% of those filing GSTR-9 and GSTR-9C respectively have already submitted their returns. It indicates the shortcomings of the system and points towards the need to reconsider the compliance requirement for the coming years. When compared to the GSTR-9, GSTR-9C holds more importance and due to its nature, enough finetuning is needed to put a steadfast system in place. Also, revision of the GSTR-9 form is a much-asked requirement of the taxpayers, which may be considered by the government.

The Union Budget 2020 may call on the GST Council to relook into this compliance requirement.

The government will keep realistic revenue targets for the year 2020-21. It will take the prudent path this upcoming Budget 2020. A senior official from the Ministry of Finance stated that the revenue targets are going to be in sync with the current economic state and conservative targets will be set. The corporate tax reduction previously announced by the Finance Minister will reap benefits in the coming years.

NITI Aayog and Economic Advisory Council participated in the meeting held by the Ministry. The government had estimated the tax revenue growth at 25.26% in the current fiscal. However, due to the downturn in the economy, the tax collections have been bleak. The low performance can also be attributed to the reduction in corporate tax rates last year and the low GST collections. The Central Tax GST collection fell short of the budgeted estimate by about 40% during the April-November period of 2019-20.

Cut in GST rates very unlikely in the Budget 2020

Several industries, including the auto sector and healthcare, have demanded that the GST rates be relooked into on certain items. But the matter is more likely to be pushed to the agenda of the GST Council only. A revenue augmentation committee has already been formed in the previous Council meeting and is looking at aspects of bringing a new GST rate structure. But with the industry demands resonating across India, these matters will be cautiously handled.

The GST rate cut on motor vehicles from 28% to 18% is a highly requested one by several associations. The healthcare sector is counting on the Budget 2020 for getting the healthcare services tagged as Nil rated. Moreover, the key players also expect the classification of the health insurance premiums as a zero-rated item under GST.

Following these, restaurants, wood dealers and garments have also made similar requests, looking for a uniform rate imposition. Among other items, the GST rates on marketing investments, subsidised training programmes, online education system, occupational insurance, auto LPG and its conversion kits might receive a reduction.

Cases of inverted duty structure to be put right

The inverted duty structure can be seen in the personal care industry that includes toilet soaps, soap noodles and shampoos. The raw materials imported are palm fatty acid distillate (PFAD) and crude palm stearin (CPS). Both PFAD and CPS can be imported at a Nil rate of customs duty under the ‘actual user’ condition in June 2017. In the last Budget 2019, a duty of 7.5% has been imposed on these raw materials import. On the other hand, the finished goods of toilet soaps and shampoos can be imported at zero duty rate. This inconsistency has led to the import of finished goods, thereby affecting the domestic manufacturers. A similar structure is observed in the import of coke (used for making steel) as against the import of steel.

It is expected that such cases of import duty will be addressed by the Union Budget 2020.

Reduction in the import duty of capital goods and inputs

The auto industry is hoping for a complete waiver of import duty on the lithium-ion battery cells. The move will help in boosting the manufacturing of electric vehicles in India, which has been under the tax limelight since the last Budget in 2019.

Another item on the list is the one that impacts the auto sector and white goods industry. The customs duty on the import of motors and PCB attracts 7.5%-10% customs duty. They are used as raw materials in the manufacturing of electric appliances such as washing machines, AC and refrigerators. Any reduction in the import duty on the raw materials will help in the reduction of the overall cost of these white goods, making them competitive in the global market.

Lowering the import duty on raw materials like rock phosphate and sulphur will help boost domestic production of fertilisers such as DAP (Diammonium phosphate). The government may look at reducing the rate of import duty this Budget 2020.

A new export incentive scheme replacing the now ineffective Merchandise Export Incentive Scheme (MEIS) is the top expectation for the pharma sector. This move should help set up bulk pharma manufacturing units in India. The new MEIS scheme was announced as being replaced by the Rebate of State and Central Taxes and Levies (RoSCTL) in 2019, but the laterals are yet to be notified. The new scheme shall be compliant with the WTO regulations too as it provides attractive incentives to the export sector.

Likewise, multiple customs law provisions need a relook into its effectiveness in terms of contributing to a bigger picture of the balance of payments. Some of them may be reformed this Budget 2020.