The government will collect CGST, SGST or IGST depending on whether the transaction is Intra-State or Inter-State. When the supply of goods or services happens within a state called as intra-state transactions, then both the CGST and SGST will be collected. Whereas if the supply of goods or services happens between the states called as inter-state transactions and IGST will be collected. It is to be noted that the GST is a destiantion based tax, which is received by a State in which the goods are consumed but not by a state in which such goods are manufactured. Unlike earlier when there were multiple taxes such as Central Excise, Service Tax and State VAT etc., under GST, there is just one tax. 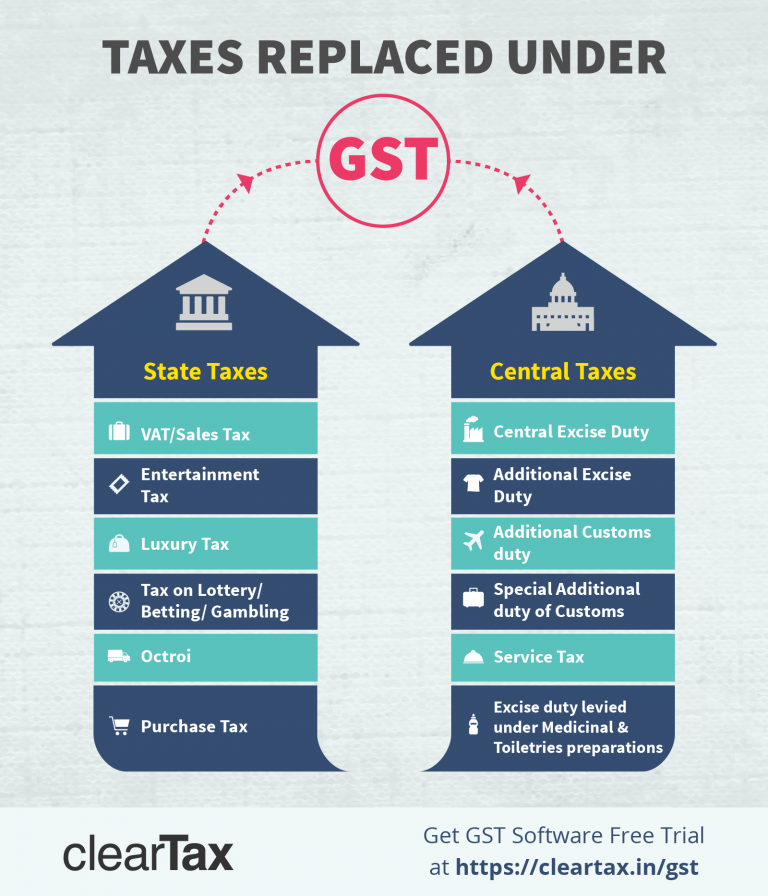 This article covers the following aspects of CGST, SGST, and IGST with examples

1. What is Central Goods and Services Tax (CGST)?

This implies that both the Central and the State governments will agree on combining their levies with an appropriate proportion for revenue sharing between them. However, it is clearly mentioned in Section 8 of the GST Act that the taxes be levied on all Intra-State supplies of goods and/or services but the rate of tax shall not be exceeding 14%, each.

2. What is State Goods and Services Tax (SGST)?

Note: Any tax liability obtained under SGST can be set off against SGST or IGST input tax credit only.

An example for CGST and SGST: 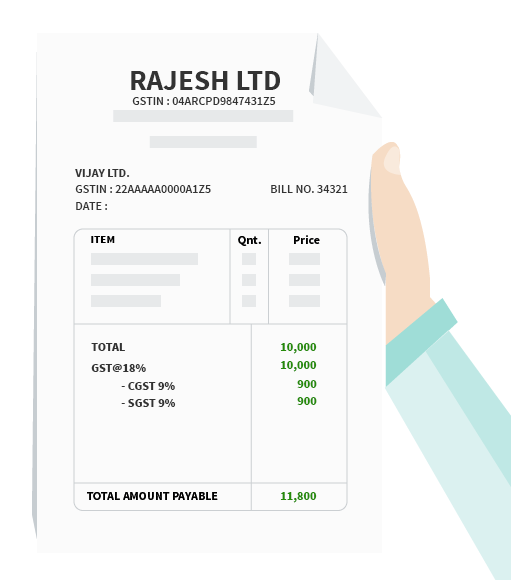 3. What is Integrated Goods and Services Tax (IGST)?

An example for IGST:

Consider that a businessman Rajesh from Maharashtra had sold goods to Anand from Gujarat worth Rs. 1,00,000. The GST rate is 18% comprised of 18% IGST. In such case, the dealer has to charge Rs. 18,000 as IGST. This IGST will go to the Centre. 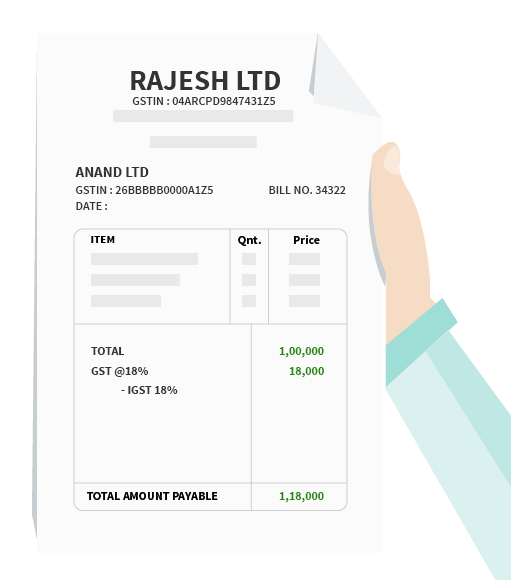 India is a federal country where both the Centre and the States have been assigned the powers to levy and collect taxes. Both the Governments have distinct responsibilities to perform, as per the Constitution, for which they need to raise tax revenue.

The Centre and States are simultaneously levying GST.

The three types tax structure is implemented to help taxpayers take the credit against each other, thus ensuring “One Nation, One Tax”. 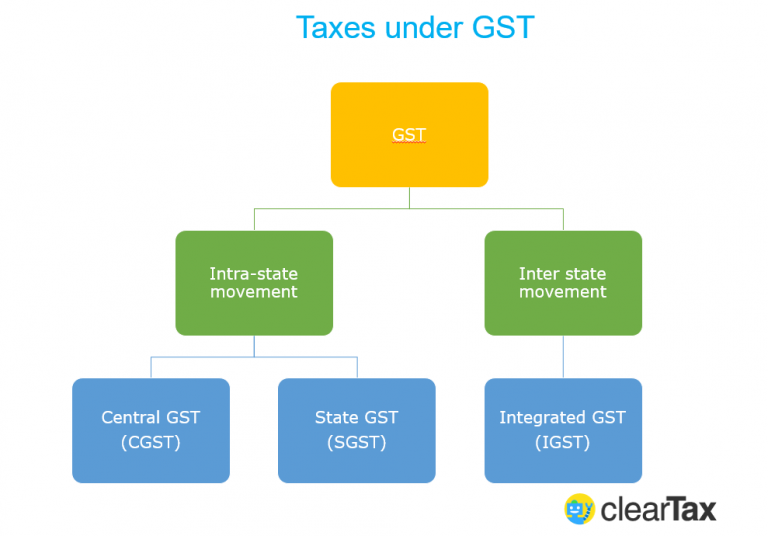 5. What determines if CGST, SGST or IGST is applicable?

6. How is input tax credits adjusted?Offset liability in GST

Let us consider that goods worth Rs. 10,000 are sold by manufacturer A from Maharashtra to Dealer B in Maharashtra.

Since A is selling this to B in Maharashtra itself, it is an intra-state sale and so, CGST@9% and SGST@9% will apply.

Dealer B (Maharashtra) is selling to Trader C (Rajasthan). Hence, this is an interstate sale, with  IGST@18%.

Trader C (Rajasthan) is selling to end user D also in Rajasthan. Once again it is an intra-state sale and hence, CGST@9% and SGST@9% will apply. 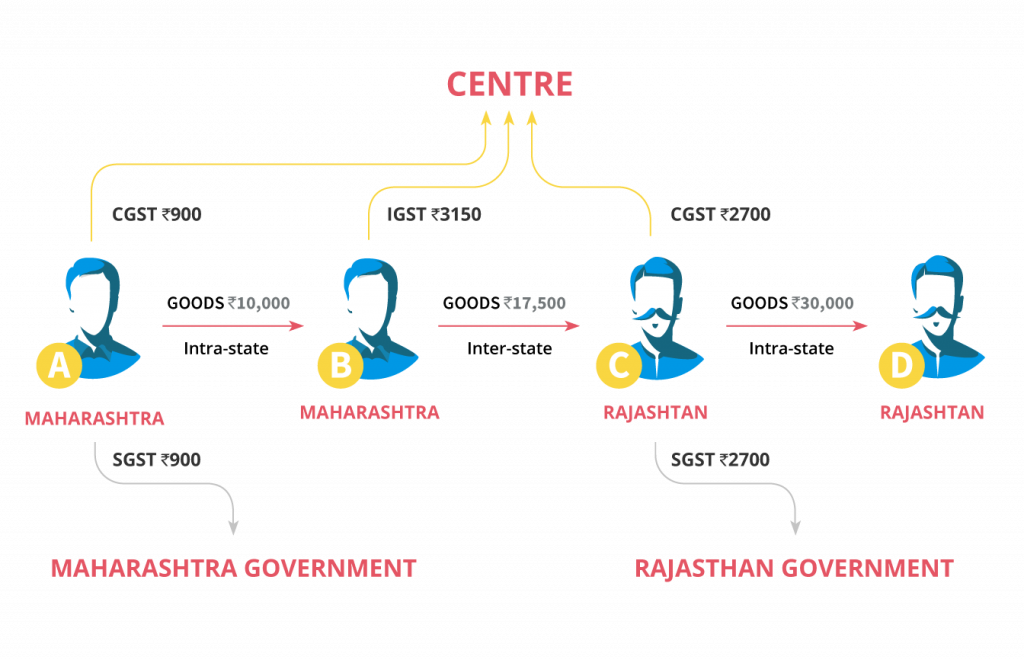 How SGST, CGST and IGST will be collected? 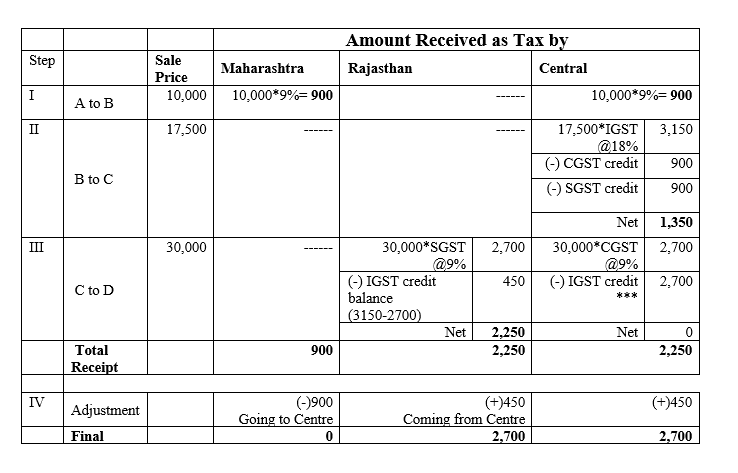 *** Any IGST credit will first be applied to set off in this order:

GST being a consumption-based tax the state where the goods were consumed(Rajasthan) will receive GST. By that logic, Maharashtra (where goods were sold) should not get any taxes. State Rajasthan and Central Government should have got (30,000*9%) = 2,700 each.

Thus, Maharashtra (exporting state) will have to transfer credit of SGST of Rs. 900 (used in payment of IGST) to the Centre. 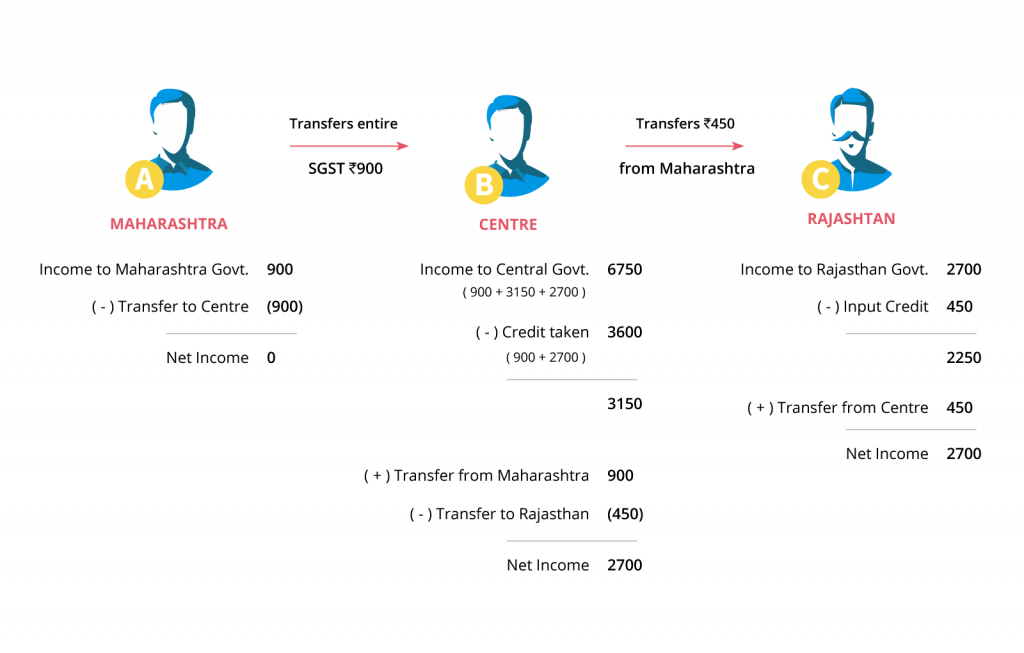 The above example shows the need for 3 taxes: SGST, CGST, and IGST. All 3 together will serve the two purposes of GST :

GST is a completely new tax with new concepts like ‘place of supply’ and new tax structures. This creates confusion with taxpayers who may end up paying the wrong type of GST.

Do you wish to register for GST? Or would you like to know about the input tax credit provisions and the transition provisions under GST? If you’re looking for the right HSN codes for the goods you deal with, we will be glad to help you find one on our ClearTax HSN lookup tool.

We have many articles covering all aspects of GST including impact analysis. We also have an All-In-One GST kit for CAs. Check out our YouTube channel for GST tutorials.