36th GST council meeting happened via video conference on Saturday (27th July 2019) after a deferment by two days. The meeting was primarily called to decide GST rate cut on electric vehicles that are currently taxed at 12%. The Union Budget 2019 announced direct tax benefits to encourage increased use of the electric vehicles for taxpayers. The previously concluded 35th GST council meeting had referred the matter of GST rate cut to the fitment committee to check its feasibility. 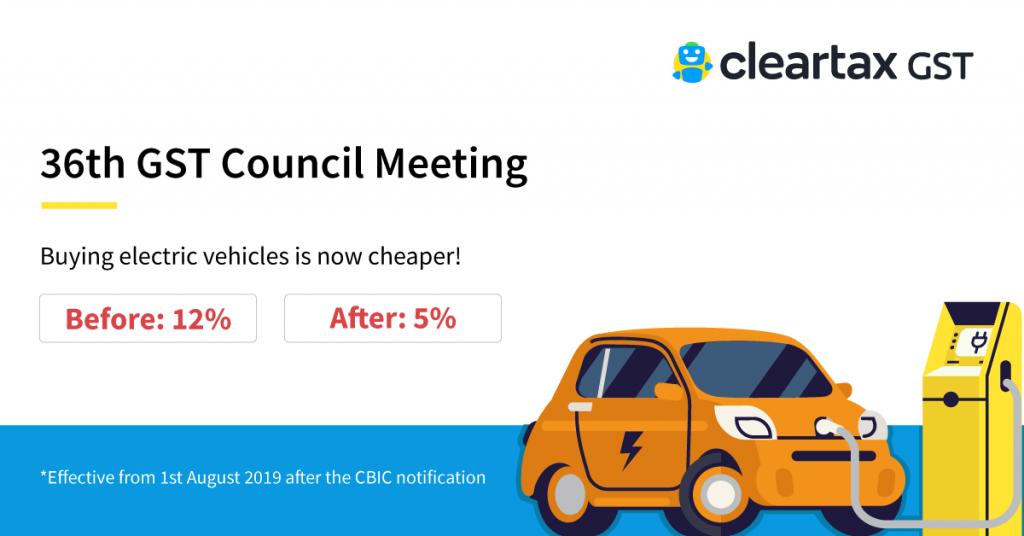 The changes will come into effect from 1 August 2019. The annual revenue loss is estimated at Rs 60 crore, which is a relatively low impact. The announcements will give a major boost to the electric vehicles market in India that is still in a budding stage. It will take a sufficient time of more than two years for a decent rise in demand for the vehicles. However, a smooth collaboration between the manufacturers and the government can aid the growth of this potential environment-friendly product. Meanwhile, Energy Efficiency Services Limited (EESL) has chalked out plans to set up more than 100 public electric vehicle charging stations at Noida, one of the most air-polluted cities in India. The reduction in the GST rate will not see an immediate rise in demand. The prices of EVs are currently high when compared to petrol and diesel vehicles. The rate cut may bring down the prices to allow level-playing for the EV manufacturers. Nevertheless, other factors must be taken into consideration one of them being a higher tax rate on raw materials when compared to EV. It leads to Inverted duty structure issue and hence working capital stuck with the government until refunded. Extension in time limit helps service sector under Composition Scheme The time limit to opt for Composition Scheme in CMP-02 is extended till 30 September 2019. Only the service providers notified under notification No. 2/2019-Central tax (rate) dated 07.03.2019 for a special Composition Scheme can avail the benefit of the extension. The deadline was earlier announced to be till 31 July 2019. Also, the due date for paying GST in CMP-08 (for the quarter April-June 2019) for all the composition dealers has been further extended to 31 August 2019 from the earlier due date of 31 July 2019. The announcement was a much-needed one as the GSTN is yet to make the CMP-08 facility available for taxpayers on the portal.

2. Council may also look at the tax treatment of lotteries

The long-pending issue of the differential tax treatment of lotteries between state-owned and state-authorised lottery players is discussed at 36th GST council meeting. The Council, in its previous meeting, had decided to seek a legal opinion of the Attorney General to determine the tax structure for lotteries. The principle reason for deferring the decision is due to the differential tax treatment within a State. It is in contradiction to Article 304 of the Constitution of India. The GST rate charged for lottery schemes authorised by State Government is at a higher 28% compared to the ones run by State Government, which is taxed at 12%. Whether the disparity in the tax structure for the same product/commodity be continued or a uniform rate be prescribed for both will be decided at 36th GST Council meeting.   Other decisions on GST rate cuts like solar power projects cannot be completely ruled out. Since it is a short meet, we expect no significant decisions in 36th GST council meeting apart from the ones given above. Read through the decisions taken and those that were deferred through the highlights of last 35th GST council meeting.