Some salaried taxpayers have to file ITR-2. This FY, the department is asking for in-depth details of the salary components from the individuals filing ITR-2 form.

An individual taxpayer who has income more than Rs 50 Lakhs (total income from salary, house property, other sources etc.) has to file their income tax return in ITR-2 form. Let’s us understand the breakup of the salary components required in filing ITR-2 form for FY 2018-19 (AY 2019-20):

For the AY 2019-20, the ITR-2 form requires a taxpayer to provide the break-up or the components of the salary. The various components of the salary for which information is required are mentioned below: a. Basic components of salary including all allowances provided to employees e.g., Basic salary, house rent allowance, leave travel allowance, gratuity etc. Each allowance under ‘salary’ has to be specified and filled in separately. Employers provide various allowances which are eligible for tax exemption in the hands of employees. For example: Mr A earns income from salary. His salary consists of the below components. Notice that some portion of the allowance received is exempt from tax. These allowances and their exempt portion will now be reported separately in ITR. Information about the various exempt allowances provided to an employee can be found in Part B of Form 16 as depicted below : 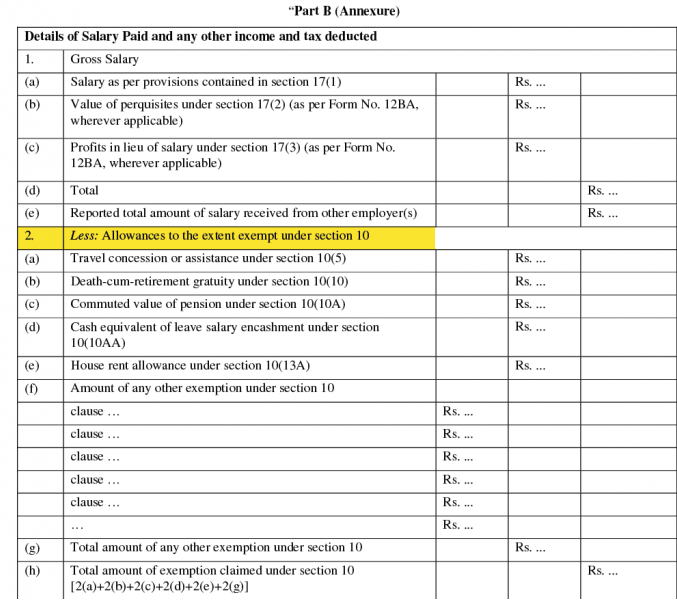 Once you upload your Form 16 on ClearTax portal, your ITR-2 will be automatically filled with the required information. File on ClearTax for free. b. The value of perquisites provided to employees e.g., accommodation, car, interest-free or concessional loans, stock options etc. Employer provides perquisites in the nature of any benefit or amenity to employees either free of cost or at a concessional rate. The value of every benefit falling under ‘perquisite’ has to be specified and filled in separately. You need not worry about filling the ITR-2 if you are using ClearTax. We automatically fill your ITR-2 with the information given in your Form-16. All you have to do is to upload Form 16 on ClearTax and file your ITR for free. For example: Mr B earning income from salary. His salary package includes the following ‘perquisites’ components:   The details of perquisites can be found in Form 12BA which is a supplement to Form 16 as shown below: 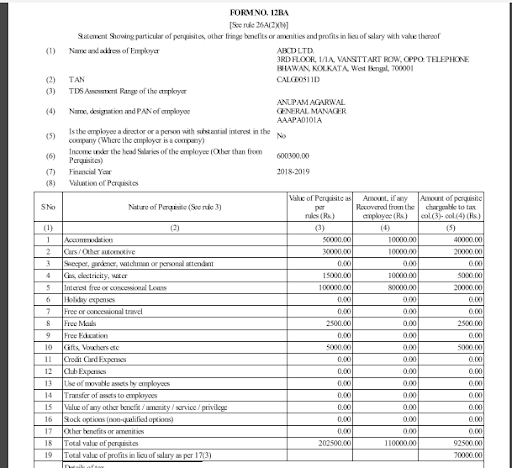 Thus, an employee can gather the basic information on the components of salary from the annexure and Form 12BA to Form 16. However, in case an employee is unable to find the information required in ITR-2 from Form 16, then the employee may need to gather the required data from their payslips etc. c. The amount due to/received by employees as profits in lieu of salary e.g., compensation on account of termination of employment, amount received under keyman insurance policy etc. ‘Profits in lieu of salary’ are amounts received by an employee in addition to or in lieu of salary, and have to be specified and filled in separately. For example: Mr B receives the below payments from his employer: The details of profits in lieu of salary can be found in Form 12BA which is a supplement to Form 16 as shown above. In case a taxpayer is employed with more than one employer in a financial year, then the aforementioned details are required to be provided for each such employment. The table below provides the broad components of salary and the source of information:

2. Summary of Details required in the ITR-2

The below table lists the details required in ITR-2 under each component of salary:

3. Reason behind the break-up of salary in the new ITR-2

The form ITR-2 seeks details of various components of salary, allowances, perquisites, profits in lieu of salary etc as discussed above. Further, the form ITR-2 also requires details of allowances claimed exempt (under section 10) out of the allowances provided in the gross salary. The intention behind the detailed requirements of the ITR-2 form is apparently to cross verify the claims for exemption under section 10 made by the employees as against the allowances received as components of the salary. In addition to the above, the detailed information about the salary components would facilitate the Income Tax Department to cross verify income reported by an employee with the TDS certificate i.e. Form 16 issued by the employer.