Late fees and interest forms important components of the Goods and Services Tax (GST) payment and is incurred by business in case of delay in submitting or filing GST returns. The article covers all latest announcements on Late fees and Interest charge in a comprehensive manner!
This article covers the following aspects: 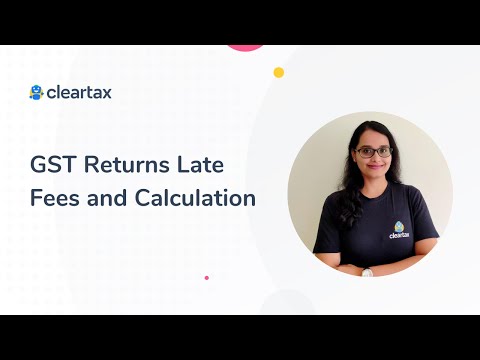 As per the outcome of 43rd GST Council meeting and CBIC notification, following are the updates:

Interest waiver for GSTR-3B and PMT-06:

The interest charged for late filing of GSTR-3B has been relaxed as follows:

(a) Turnover is more than Rs.5 crore in the preceding financial year and GSTR-3B is filed on a monthly basis, interest is reduced/waived off for April and May 2021 (Due date: 20th May or 20th June) as follows: Interest reduced to 9% for filing on or before 5th May (4th June), but charged at 18% thereafter.

(b) Turnover is up to Rs.5 crore in the preceding financial year and GSTR-3B is filed on a monthly basis, interest is reduced/waived off for April and May 2021 (Due date: 20th May or 20th June) as follows: No interest for filing on or before 5th May (4th June), interest reduced to 9% for filing between 6th May (5th June) and 20th May (19th June), but charged at 18% thereafter.

(d) The interest for late submission of form PMT-06 to pay tax as a QRMP scheme taxpayer is reduced or waived off as follows for April 2021: No interest for filing on or before 9th June, interest reduced to 9% for filing between 10th June and 25th June, but charged at 18% thereafter.

1st February 2021 Union Budget 2021 outcome: Section 50 of the CGST Act is being amended to provide for a retrospective charge of interest on net cash liability with effect from the 1st July 2017.

All about Late Fees under GST

As per GST laws, the late fee is an amount charged for delay in filing GST returns. A prescribed late fees will be charged per each day of delay, when a GST Registered business misses filing GST Returns within the prescribed due dates*. The late fee should be paid in cash and the taxpayer can not use the Input Tax Credit (ITC) avaible in electronic credit legder for payment of late fee.

The late fee is also applicable for the delay in filing NIL returns. For example, one has to pay late fee even though there are no sales or purchases and no GST liability to declare in GSTR-3B.

The late fee will depend upon the number of days of delay from the due date. GST return in GSTR-3B is filed on 23rd January 2019, 3 days after the prescribed due date i.e 20th January 2019. the, the late fees will be calculated for three days and it should be deposited in cash. However, currently, the GST portal is aligned to charge a late fee only on returns GSTR-3B, GSTR-4, GSTR-5, GSTR-5A, GSTR-6, GSTR-8, GSTR-7 and GSTR-9 only.

FOR ALL GST RETURNS EXCEPT GST ANNUAL RETURNS(GSTR-9)

Following are the changes that have been made on the applicability of the late fees: Note: Rest of the returns like GSTR-7, GSTR-8, GSTR-5A or GSTR-9 will have late fees applicable to them as per the Act at normal fee. ** If paid before the waiver, this amount will be credited into the electronic cash ledger for use, to pay against the tax liability. ^ The previous notification 6/2018 was cancelled prospectively.

How to deposit Late fees with Government

Amount of Late fee applicable will automatically be calculated by the GST portal while submitting the GST returns. The Late fee is paid in cash separately for CGST, SGST and IGST in separate electronic cash ledgers. GST return cannot be filed without the payment of the Late fee. Late fee for the month includes previous month’s late fee charged due to delay in filing of the return. Also, non-payment or late payment of GST attracts Interest.

All about Interest under GST

Interest  is applicable on Late Payment of GST liabilitiy. The interest has to be paid by every taxpayer who:

If GST is not paid within the due dates of filing return Interest at following rates has to be paid:

The Interest has to be calculated from the next day on which tax was due. For example, a taxpayer fails to make a tax payment of Rs. 10,000 for the month of December 2017, where the due date was 20th January 2018. If he makes the payment on 20th February 2018, the interest for the delay period (31 days: from 21st January till 20th February) will be calculated as follows:

For Further Reading and Understanding:

Download now
>
Get Free Demo from our GST experts: