Just when we were settling with the existing return related procedures, the government changed the procedure for the order of set-off of the same with effect from 29th March 2019. However, the functionality of the portal continued to be the old mechanism. The new rules were laid down to reduce the balance lying under IGST Credits to optimise the distribution between the Center and the state. However, if the mechanism is not understood and off-set is not optimised, then the businesses might end up on higher working capital requirements. Thus, it becomes imperative to understand what is the change and how it will impact businesses.

29th December 2021
CGST Rule 36(4) is amended to remove 5% additional ITC over and above ITC appearing in GSTR-2B. From 1st January 2022, businesses can avail ITC only if it is reported by supplier in GSTR-1/ IFF and it appears in their GSTR-2B.

21st December 2021
From 1st January 2022, ITC claims will be allowed only if it appears in GSTR-2B. So, the taxpayers can no longer claim 5% provisional ITC under the CGST Rule 36(4) and ensure every ITC value claimed was reflected in GSTR-2B. The Amended Law on Order of ITC Set-Off

CGST Circular No. 98/17/2019 was issued on 23 April 2019 has clarified the order of ITC utilisation for each tax head. It further stated that until the Rule 88A of the CGST Rules was implemented on the GST portal, taxpayers had to follow the facility available on the GST portal up to July 2019. The facility was made available from July 2019 returns onwards.

Firstly, let’s take a look at the two sections inserted in the CGST Act-

Section 49B: Notwithstanding anything contained in this Chapter and subject to the provisions of clause (e) and clause (f) of sub-section (5) of section 49, the Government may, on the recommendations of the Council, prescribe the order and manner of utilisation of the input tax credit on account of integrated tax, central tax, State tax or Union territory tax, as the case may be, towards payment of any such tax.”.

Subsequently, the rule 88A has been inserted to notify the above new provision via CT notification no. 16/2019 dated 29th March 2019.

As per the Circular No: 98/17/2019 dated 23 April 2019, it has been clarified that- As per the provisions of Section 49 of the CGST Act, credit of integrated tax has to be utilised first for payment of integrated tax, then Central tax and then State tax, in that order mandatorily.

It is clarified that after the insertion of the said rule, the order of utilisation of input tax credit will be as per the order (of numerals) given below:

With the new rules in place, it is mandatory to utilise the entire IGST available in electronic credit ledger before utilising ITC on CGST or SGST. The order of setting off ITC of IGST can be done in any proportion and any order towards setting off the CGST or SGST output after utilising the same for IGST output.

What is the Maximum ITC that can be utilised to pay GST liability?

From 1st January 2021, certain taxpayers cannot utilise the ITC balance available in the electronic credit ledger to discharge more than 99% of the tax liability for a tax period. It means atleast 1% of tax liability must be paid by cash.

It applies to such taxpayers who have monthly value of taxable supplies more than Rs.50 lakh (not being exempt or zero-rated supplies). The following taxpayers are exempted from this restriction:

For information about implications, read our article on ‘All about Rule 86B‘.

How does ClearTax help in ITC Optimisation?

ClearTax GST software is equipped for optimum ITC utilisation. With ClearTax, know the exact amount of ITC to be utilised under each of the tax head -CGST, SGST and UTGST. ClearTax automatically computes the tax payable during the month or quarter by first considering ITC of IGST before moving onto CGST or SGST. Balance ITC available under CGST and SGST/UTGST shall be allocated optimally to help you get maximum benefit. It ultimately keeps your cash outflow minimum possible.

Let’s understand the impact of New Rule with the help of an illustration: Suppose, Mr. X has the following liability and input tax credit for the period are as follows:

Let’s see how the ITC of IGST can be utilized in different ways from the following 2 scenarios: 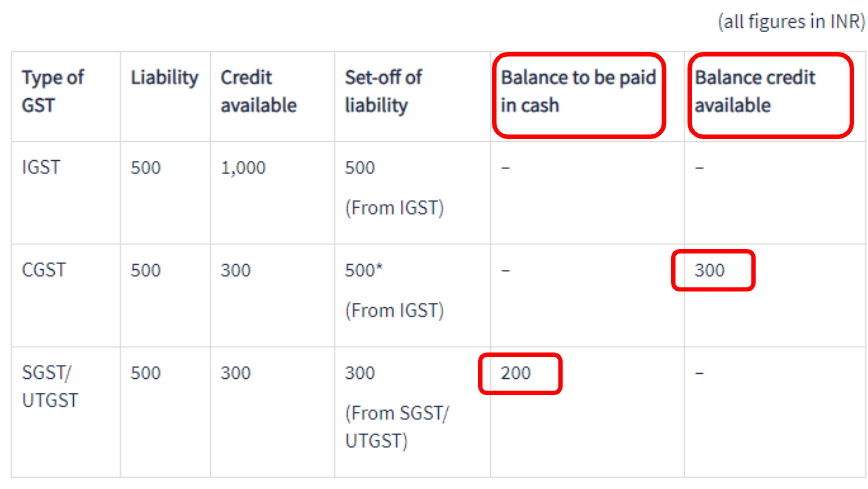 Scenario 2: Set-off of unutilized IGST credit partly towards CGST and SGST liability as optimized by ClearTax 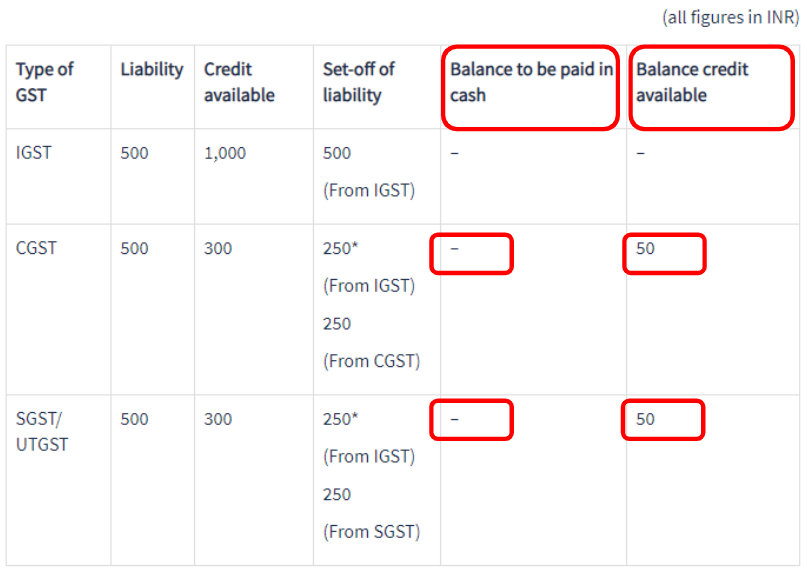 *Note: In this illustration, we came up with only two scenarios whereas the law does not place any strict rule of attributing entire unutilized IGST credit wholly to either CGST or SGST liability. A taxpayer can utilize IGST credit in any proportion and in any order, but the condition is to completely utilize the IGST credit before using CGST or SGST credit. Hence, in the above illustration, ClearTax helps optimize the ITC for you and also the cash to be paid was reduced

From July 2019 onwards the below mode of off-set functionality has been made available, the following is the order and priority for ITC utilisation

*The order of utilisation of IGST credit post offset to IGST liability can be in any order or proportion between CGST/SGST but the only pre-condition is exhausting IGST completely before using other credits. Hence, from the above table for new rules, it can be concluded that any taxpayer must begin with set-off process starting with ITC of IGST and utilise it completely before proceeding to utilise the ITC of CGST or ITC of SGST.

Illustrations on How GST Set-Off Works

Let us discuss the applicability of provisions using two illustrations.

Illustration I: To understand the order of IGST credit set-off

There is an only procedural change in utilising IGST credit. To understand the set-off from a practical perspective, let us take an example. Suppose, Mr X has the following GST liabilities and GST inputs.

As per the existing system, the set-off takes place as follows-

You can see that CGST or SGST payable needs to be paid first with CGST credit or SGST credit respectively.

However, as per the new procedure of set-off, the IGST credit available will need to be set-off and the following are the three possible ways in which this can be done-

*Note:In this illustration, we came up with only three scenarios, whereas the law does not place any strict rule of attributing entire unutilised IGST credit to CGST or SGST liability.

A taxpayer can utilise IGST credit in any proportion and in any order, but the condition is to completely utilise the IGST credit before using CGST or SGST credit. So as you can see in the example, IGST credit has been utilised first as per the new system of set-off, only after which, can CGST or SGST/UTGST be set-off. To optimise credit utilisation it is advisable to follow Scenario 3.

Illustration II: To understand business Impact due to the new rule

Let us see how the ITC of IGST can be utilised in different ways from the following three scenarios:

*Note: In this illustration, we came up with only three scenarios whereas the law does not place any strict rule of attributing entire unutilised IGST credit wholly to either CGST or SGST liability.

But if the taxpayer follows scenario 3, there is no need for a cash payment of either CGST or SGST liability and he can also carry forward an equal amount of CGST and SGST in ECL so that in succeeding months if the purchase or sales pattern changes from inter-state to intra-state or vice-versa, retaining an equal balance in both the ledgers will help optimising the utilisation of credits in future as well. This measure has to be carefully monitored.

The validations based on the changes in the rule has been updated on the portal from July 2019 onwards.

Let us discuss how exactly this impacts your business- The amended GST offset rules mandates for complete utilisation of IGST input credit before using the CGST or SGST input credit. In illustration 2 we can observe that the taxpayer has a higher credit due to interstate purchases when compared to the intrastate purchase. In turn, the sales are more within the state when compared to outside the state. It leads to the accumulation of more IGST input credit. Accordingly, if this is not properly utilised it may lead to blockage of working capital.

If the taxpayer follows either of the scenario 1 or 2 in the illustration II, they are evidently deferring the respective CGST or SGST credits balance (as the case may be) to be utilised over several tax periods. It results in blockage of working capital for a considerable period of time.

Alternatively, the taxpayer should wait for a future day where his interstate sales (IGST liability) are higher than intrastate sales to completely utilise the balance credit of CGST or SGST brought forward. If the taxpayer goes with scenario 3 by utilising available credit in equal proportion of CGST and SGST, he can avoid the payment of tax and the blockage of working capital that can follow. However, from the government’s point of view, the new provision is an immediate measure to allow smooth distribution of IGST revenue.

Takeaway: The GST portal allows taxpayers to manually set off the input tax credit against the output liabilities. It is advisable that the taxpayers make optimum utilisation of ITC available to them by careful allocation of credits every tax period. The new off-set mechanism in no way leads to additional working capital requirements compared to the old mechanism if properly optimised.

Further in case of carrying forward credits it is very much advisable to strike a balance & retain equal credits in both CGST and SGST/UTGST ledgers for optimising credits in future as well. The easiest way to accomplish this is after using the IGST credits for the IGST liability, the balance available in IGST credits to be equally utilised for CGST/SGST credits. If businesses have missed out doing it in the last two months in the next month they can optimise on it to arrive at an equal balance in both CGST/SGST credit ledgers in case of excess ITC availability and continue the same henceforth.