Get you Tax query Solved

Pick from the basket of various allied services:

RoDTEP stands for Remission of Duties and Taxes on Export Products. It is a new scheme that is applicable with effect from January 1st, 2021, formed to replace the existing MEIS (Merchandise Exports from India Scheme). The scheme will ensure that the exporters receive the refunds on the embedded taxes and duties previously non-recoverable. The scheme was brought about with the intention to boost exports which were relatively poor in volume previously. 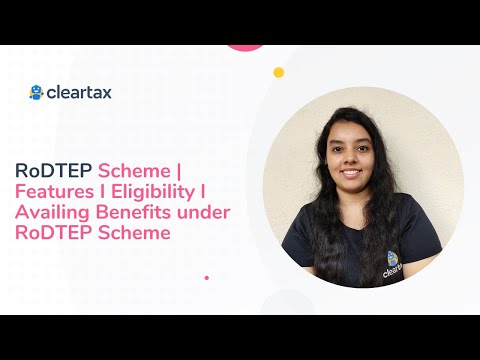 Need for the RoDTEP Scheme

The following were some of the export subsidy programmes recommended to be withdrawn:-

Features of the RoDTEP Scheme

Refund of the previously non-refundable duties and taxes

Mandi tax, VAT, Coal cess, Central Excise duty on fuel etc. will now be refunded under this particular scheme. All the items under the MEIS and the RoSTCL (Rebate of State and Central Taxes and Levies) are now under the purview of the RoDTEP Scheme.

The refund will be issued in the form of transferable electronic scrips. These duty credits will be maintained and tracked through an electronic ledger.

Through the introduction of the digital platform, the clearance happens at a much faster rate. Verification of the records of the exporters will be done with the help of an IT-based risk management system to ensure speed and accuracy of transaction processing.

Under RoDTEP, all sectors, including the textiles sector, are covered, so as to ensure uniformity across all areas. Additionally, a dedicated committee will be set up to decide regarding the sequence of introduction of the scheme across the various sectors, what degree of benefit is to be extended to each sector, and such related matters.

Eligibility to obtain benefits of the RoDTEP Scheme

The ICEGATE portal (Indian Customs Electronic Gateway) will contain the details regarding the credits availed by the exporter. At the port, the exporter must indicate in the shipping bill the details regarding the claim of the RoDTEP benefit with regard to a particular item of export and generate a credit scrip for it. These credit scrips are then used to pay basic customs duties, claim rebates or can be transferred to other importers, as the case may be.

Currently, the rate of duty of remission for the products under RoDTEP scheme is not yet notified by the Government of India.

Has the RoDTEP scheme rates been notified?

On 17 August 2021, the Central Government notified the RoDTEP scheme rates and guidelines. The notified rates under the RoDTEP scheme for several sectors include the rates at 0.5%, 1.4%, 2.4% and 4%. However, the government is yet to notify a fixed quantum of rebate per unit for certain export items.

What industries are covered under the RoDTEP Scheme?

The RoDTEP scheme covers employment-oriented sectors like marine, leather, gems and jewellery, agriculture, etc. It will also support other sectors like electrical/electronics, automobiles, machinery, plastics, etc. The RoDTEP and RoSCTL (Rebate of State and Central Taxes and Levies) cover the entire value chain of textiles.

Which are the sectors that have been excluded from the RoDTEP scheme currently?

Some of the most critical sectors currently excluded from the benefit under the RoDTEP scheme are pharmaceuticals, steel, organic and inorganic chemicals, etc.

What are the documents required for applying to the RoDTEP Scheme?

The documents required to apply for RoDTEP Scheme:

How long will the  RoDTEP scheme be in effect?