Electronic invoicing or e-Invoicing is a system of raising invoices, under which invoices generated by one software can be read by any other software, eliminating the need for fresh data entry and errors.

In simpler words, it is an invoice generated using a standardised format, where the electronic data of the invoice can be shared with others, thus ensuring interoperability of data.


2. How will the e-Invoicing model work?

Under the e-Invoicing model, businesses will continue to generate invoices on their respective ERPs just as was being done in the past. Only the standard, schema and format for the generation of invoices will be specified, to ensure a level of standardisation and the machine-readability of these invoices.

The generation of the e-Invoice will be the responsibility of the taxpayer. Once generated, it will need to be reported to the Invoice Registration Portal (IRP) of GST. The IRP will generate a unique Invoice Reference Number (IRN) and digitally sign the e-Invoice. It will then generate a QR code. The QR Code will contain vital parameters of the e-Invoice and return the same to the taxpayer who generated the document in the first place. The IRP will also send the signed e-Invoice to the recipient of the document, on the email ID provided in the e-Invoice.
3. What are the types of documents that are to be reported into the IRP?

The following documents will be covered under e-Invoicing for now-

4. How will the workflow of e-Invoice take place?

The workflow of an e-Invoice involved two major parts- 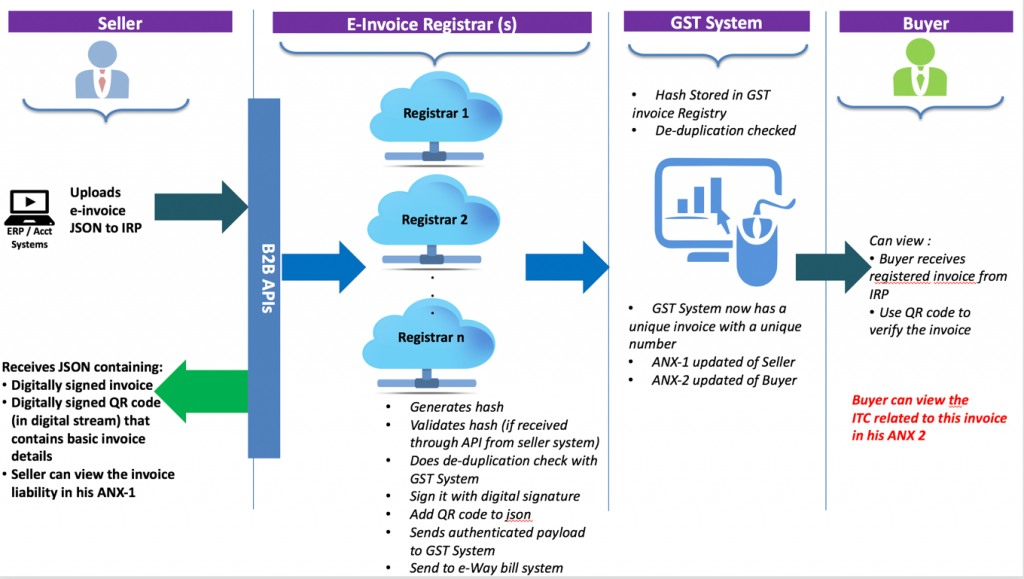 5. When will e-Invoicing get implemented in India?

It has been proposed that e-Invoicing get implemented in India from January 2020.


6. To whom will e-Invoicing apply?

Initially, e-Invoicing will be introduced on a voluntary basis, after which, it could be mandated for taxpayers above a certain turnover or for invoices above a certain value. Eventually, the objective is to bring all taxpayers under its gamut in a phase-wise manner.


7. How will the system of e-Invoicing be integrated with GST Returns?

An e-Invoice will be uploaded into the relevant GST return only once it has been validated and registered by the invoice registration system. After the validation has been done, it will be visible to the recipient for viewing and taking action (in the new return system).

The main aim of the tax department is to enable the pre-population of GST returns, which will reduce reconciliation-related problems. Once e-Invoicing has been implemented, the data in the invoices can be pre-populated into the relevant tables of the tax returns without the need for fresh data entry.


8. Which are the countries following the system of e-Invoicing?

Some of the countries who have already adopted the system of e-Invoicing are South Korea, Brazil, Chile, Mexico, Canada, Norway, Sweden, Turkey, Italy, Denmark, Peru, etc.


9. How will an e-Invoice format look?

The e-Invoice format is exhaustive. It caters to different industries and businesses using a single format.

Here is an example of an e-Invoice format.
10. What are the benefits of e-Invoicing?

Here are some of the e-Invoicing benefits:

11. What is the e-Invoicing software that will be used?

The GSTN, in partnership with the ICAI (Institute of Chartered Accountants of India), has drafted an e-Invoice standard. This refers to PEPPOL (Pan European Public Procurement Online), which is based on the UBL (Universal Business Language) standard. This takes into account the requirement under tax laws and has features which are required for international trade.


12. What will be the data contained in an e-Invoice?

As per the draft format generated by the GSTN, an e-Invoice will contain the following parts-

13. Will the e-Invoice format be the same for all categories of taxpayers?

The standard of an e-invoice has been designed with certain mandatory fields which need to be filled in by all taxpayers, and certain optional fields which will depend on the specific needs of a business/enterprise.


14. Will there be a facility for invoice generation on the common GST portal?

No, invoices will continue to be generated on the individual ERP softwares that are currently in use by businesses.

The invoice must conform to the e-Invoicing standard and include the mandatory parameters. The direct generation of invoices on a common portal is not being envisaged/planned at the moment. Small taxpayers can make us of eight free accounting/billing softwares currently listed by the GSTN.
15. What is the maximum number of line items supported by an e-Invoice?

The maximum number of line items allowed per e-Invoice is 100.


16. Does an e-Invoice need to be signed again by the supplier?

It is not mandatory for a supplier to sign the e-Invoice again. The e-invoice will be digitally signed by the IRP after it has been validated.


17. Can a business place their LOGO on the e-Invoice template?

No, there will be no place-holder provided in the e-Invoice scheme for a company’s logo. The company can provide for the same in its accounting/billing software, however, the logo will not get sent to the IRP.


18. Will the bulk-uploading of invoices be possible?

No, invoices will need to be uploaded one at a time into the IRP. The ERP of a company will need to be designed so that it can place the request for the upload of individual invoices.


19. What are the modes available for getting e-Invoices registered?

Multiple modes will be made available for getting e-Invoices registered on the Invoice Registration Portal (IRP). Some of the proposed modes are-

20. For how long will the data be available on the Government Portal?

On the IRP, the data will remain for only 24 hours. However, once an invoice has been registered and validated, it will be uploaded into the relevant GST return where it will be available for the entire financial year.


21. Can an e-Invoice be cancelled partially/fully?

All amendments to an e-Invoice can be made only on the GST Portal.