Eway Bill under GST in Telangana

Government of Telangana is known to have consistently strengthened its Information Technology structure. This can be seen with the number of reforms undertaken since its formation in June 2014. To ensure that good governance and compliance system be in place, Telangana Government also has had a temporary waybill system in effect during the GST era prior the Centre-led e-way bill system took off.

In this article, We cover the following:

Government of Telangana is known to have consistently strengthened it’s Information Technology structure. This can be seen and felt in the shift from manual to automated Waybills in the region since December 2015. Waybills existed in the pre-GST regime also. There were VAT Waybills and CST Waybills in the State. Printed Waybills in Form X or also known as Form 600, issued by State Government or Commissioner were required to be carried by every dealer who transported goods by a Goods Vehicle within the State, in original and duplicate copies. The original copy of Waybill had to be submitted to the Officer in charge at the first Checkpost through which the carrier passed. Where the goods came into the State from any other State, then the Waybills generated in such other State along with the tax invoice or valid documents was accepted. All dealers of the twin cities of Hyderabad and Secunderabad alongwith the R.R District had to use the online generated ewaybills and not the manual Waybills starting 1st December 2015. Manufacturers who had to transport goods could produce the gate-cum-invoice raised by them as the valid document or pass instead of the Waybill prescribed. He had to ensure that TIN was mentioned clearly on such Invoice.

2. Whether movement of goods in Telangana need EWay bill

Yes. ewaybills are required to be generated and used in the State of Telangana. For the movement of goods within the State(intra-state transport), the commercial tax department has its own State Portal where eway bills can be generated starting February 10, 2018. This has to be followed until the State notifies date for implementation of eway bills on the common NIC portal for intra-state movement of goods.

So, People of Telangana must start generating e-way bills on the common NIC portal for movement of goods within their State starting April 15.

For the movement of goods across the State borders ( inter-state transport), the users have to start using the common NIC portal or the ewaybill portal starting April 1, 2018.

3. ewaybill within Telangana: Rules and procedure of the intermediary system

4. How to register on the Telangana portal for Intra-state generation of eway bills 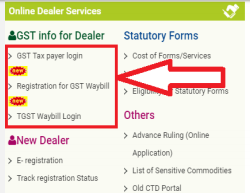 Step 2: Click on “Registration for GST Waybill” link on the home page. 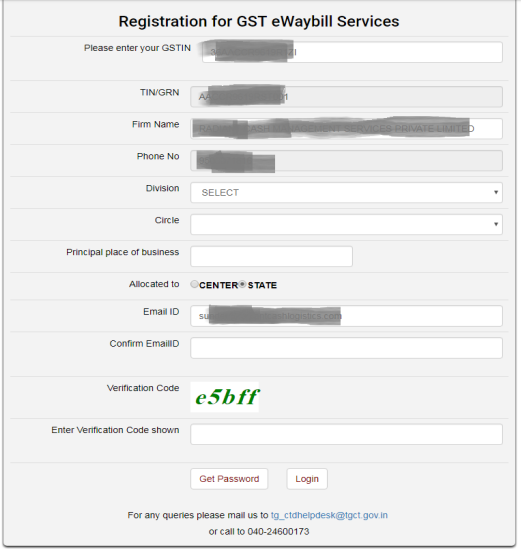 Step 4: Fill all the required details and Click on ‘Get Password’. Password is sent to the official mail ID. Use this to login on the Telangana way bill portal and start generating eway bills.

5. How to generate eway bills on the Telangana portal for Intra-state movement of eway bills

Once logged in the Telangana portal, below dashboard appears: 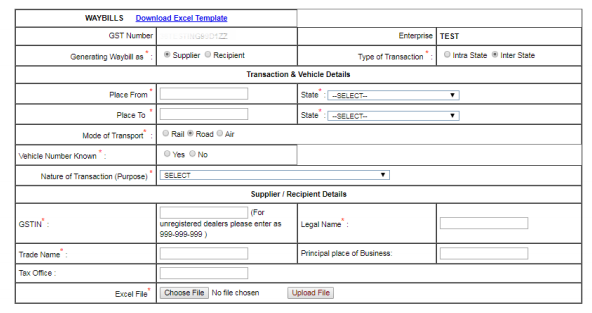 Enter the all the mandatory fields on the screen. Download the excel file, fill up all the details of transactions, supplier or recipient and the vehicle. Upload the file by clicking ‘Upload File’. 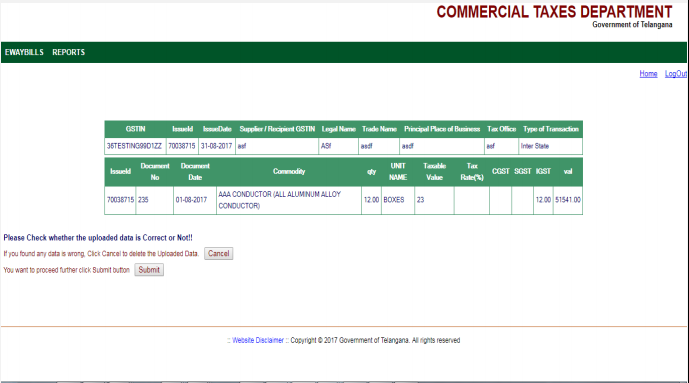 Verify the correctness of entries made and Click on ‘Submit’ to proceed. Once submitted. Eway bill is generated in PDF. Download and print the same for use.

6. How to register and generate eway bills on NIC portal

Inter-state movement of goods across India requires eway bill generation from the NIC portal starting April 1, 2018. Also suppliers must start using this portal instead of the Telangana portal once the State of Telangana notifies the applicability of eway bills generation from the NIC portal. Following taxpayers can use the NIC portal: Registered Suppliers Registered/ Unregistered Transporters Unregistered Suppliers Registration on the e-way bill portal is compulsory to generate the e-Way Bills. We have a detailed guide on how to register on the NIC portal to generate eway bills.
Start matching
Start matching