The Unique Identification Authority of India (UIDAI) has introduced a new feature to ensure increased security of data. This new layer of security is called Aadhar Virtual ID (VID). This new feature will enable authentication of transactions by providing authorised agencies just enough data, such as name, address, and photograph, for e-KYC, instead of the Aadhaar number.

1. What is an Aadhar Virtual ID?

Now the users can use their Aadhaar Virtual ID (VID) in place of providing their Aadhaar number. The VID is a unique 16-digit code that is randomly assigned to their user. The VID gives limited KYC to the relevant agencies. UIDAI has made it mandatory for all Aadhar-authentication agencies to accept VID from applicants as of 1 June 2018.

A user can generate their VID through the UIDAI portal.

2. How to generate Aadhaar Virtual ID

Step 4: Click on ‘Send OTP’. An OTP will be sent to the registered mobile number. 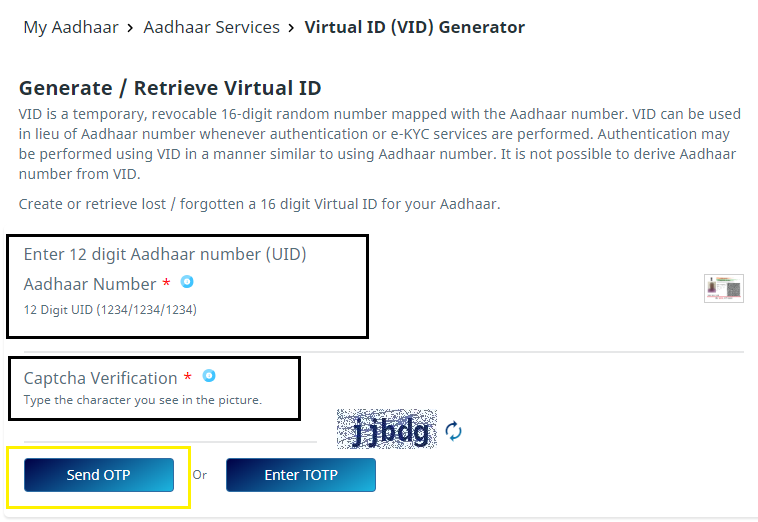 Step 7: You will receive a confirmation message via SMS on the registered number with the 16-digit Virtual ID.

3. Why do we need Aadhaar Virtual ID?

The UIDAI introduced the Aadhaar Virtual ID to heighten the security on the personal data of the users. It masks the details mentioned on their Aadhaar card with a digitally generated 16-digit VID. By using the VID, service providers will not be able to access the Aadhaar number of the user. Thereby, preventing the misuse of the user’s Aadhaar information.